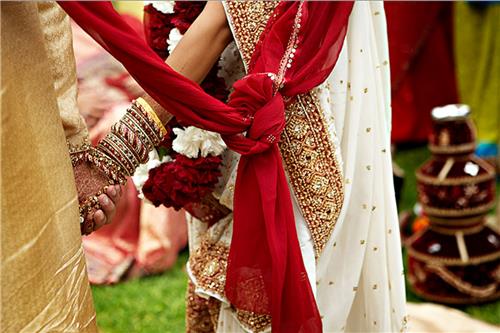 Marriage is both a social as well as religious event in India. Different communities have their own traditions and customs of solemnizing a marriage.
Well, marriage is a union of two families and not just two individuals. Marriage functions aid in bringing relatives of bride and bridegroom together and enjoy moments of fun and frolic while also getting to know each other.

Earlier, Families used to take a month off for any wedding in the family. They used to sit and chat together and even cook meals. However, people have become more practical these days.
The main events such as catering, decoration, music and dance functions are generally outsourced and all customary functions are over within a couple of days. 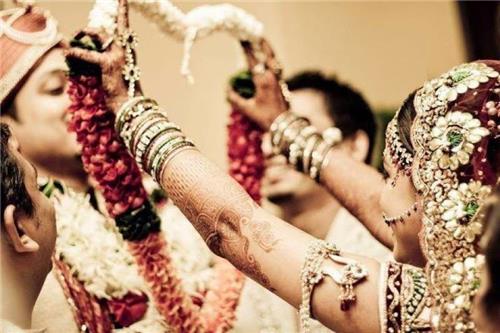 Indian marriage culture till date has remained untouched by Western influences and have maintained all sanctity till date. Hindu wedding customs differ as we go from one region to another.
However, some traditions are common such as prayer (Ganesh puja), Haldi rasm, Sagan (exchange of gifts to confirm engagement), Sangeet and Sagai which are pre-wedding customs. Marriage is arranged in a rented wedding hall, marquee or the bride's home yard.

Wedding takes place with rituals like Jaimala, Kanyadaan, Sindoor, Mangalphere and Saptapadi. These are held at night with a 'pandit' or priest who takes care of religious rituals and chants Sanskrit hymns and mantras in front of the sacred fire.
Shahnai is played throughout the functions in the background. The groom arrives for the wedding along with his 'baraat' dancing all the way. The groom is either in a car or on the horse back!

The most important ritual in Hindu marriages is Saptapadi when the bride and the groom have to take seven steps together facing the North direction after which the bride shifts to the groom's left.
Now, the couple is declared as married. That's because traditional wedding dresses are typically quite colorful and elegant. All weddings culminate with Doli or farewell of the bride to the groom's house. 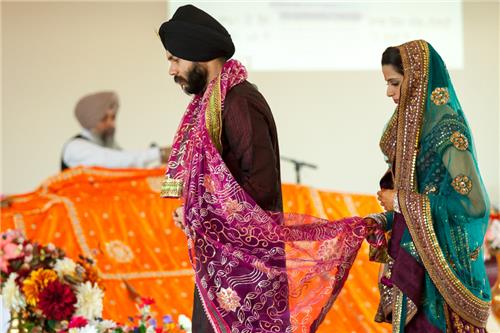 In a Sikh wedding, bangle ceremony is really a unique event when the bride's maternal uncle and aunt put red bangles on the bride's wrist.
Also, during the marriage ceremony, the bride and the groom sit in front of the Granth Sahib. The prayers (ardas) are read out and the ten Sikh gurus are saluted. 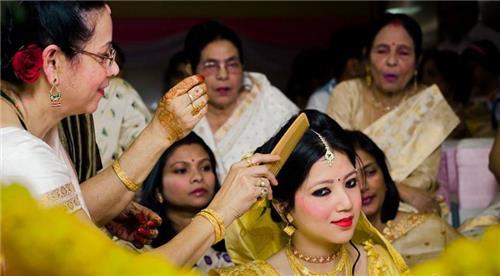 In Assam, wedding ceremony is known as 'Biya'. The Juran ceremony involves visit of groom's mother to the bride's house. During Tel Diya ceremony, the groom's mother applies sindoor and gifts traditional Assamese dress mekhla chadar.
During the wedding, the groom wears a dhoti, kurta, and silk shawl. The blowing of the conch shells during the wedding ceremony imparts a spiritual atmosphere. 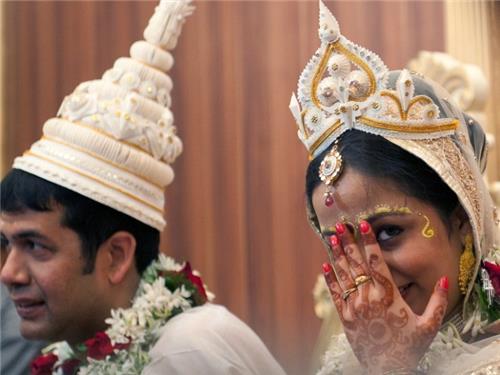 Bengali wedding too has similar traditions with different names. Main rituals include Vridhi puja (when ancestors of the bride and groom are remembered), Gae Halud Tattva ritual (in which bride is given gifts by in-laws), and Snan ritual (turmeric and oil are applied to the couple).
Wedding day rituals include welcoming of the groom, Shubho Drishti ritual (when bride and groom see each other for the first time), mala Badal ceremony (exchange of garlands), Saat Paak (bride is made to sit on a wooden plank and lifted by her brothers) and Saptapadi.
Post wedding rituals comprise of Basar Ghar ceremony (newlyweds are served delicious food), Bashi Biye ritual (groom applies vermilion on bride's forehead), Bidaai ceremony, Bou Baran (welcome ceremony for bride at the groom's house) and Bou Bhat ceremony (bride eats her first meal in her husband's house). 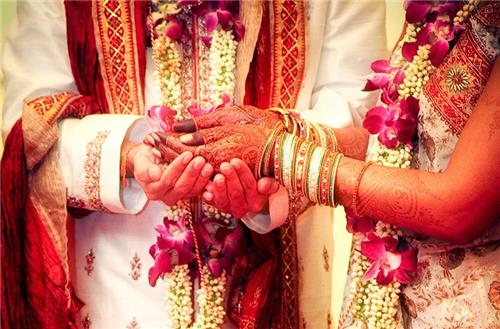 Mangal Mahurat involves praying to Lord Ganesha for His blessings. Other rituals include Jaan (to ward off evil). Imagine the scene when the groom touches his mother-in-law's feet and she tries to clutch his nose! Well, some rituals are meant to amuse and bring cheer in the family.
The wedding day comprises of Jaimala (exchange of garlands between the couple), Madhuparka (washing of groom's feet and offering him milk and honey to drink), Juta Churai (when the bride's sisters try to steal the groom's shoes and give them back only after much cajoling and gifts in return!), Kanyadaan (bride's father washes the groom's feet and gives the hand of his daughter for marriage) and Hasta Milap (groom's shawl is tied to the bride's saree).
Mangalpheras take place amidst the chanting of hymns by the priest and the couple takes rounds (pheras) around the sacred fire. They are blessed by everyone present. Post-wedding rituals are Vidai ceremony (bride leaves her home), Ghar Ni Lakshmi (when the bride reaches the groom's home and is asked to knock down a vessel filled with rice), Aeki Beki (in which water is colored using sindoor and milk and coins and ring are put into it which the bride and groom have to find). 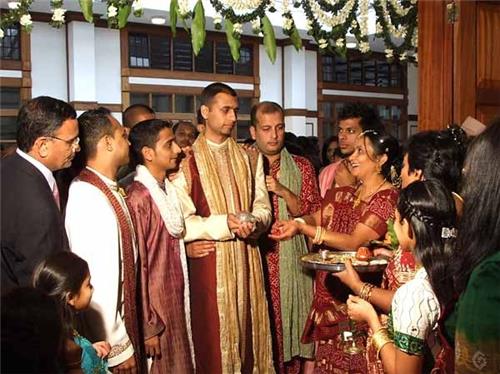 Pre wedding rituals among Jains include Lagana Lekhan which is organized at the bride's house. Vinayakyantra puja and Sagai are held at the groom's place. The date and time for the wedding is agreed upon in Lagana Lekhan ceremony. The letter is read out loud in the groom's house during Lagna Patrika Vachan.
Other rituals are Mada Mandap, Barati, Aarti, singing of mangal geet, etc. On the day of the wedding, the bride and groom sit in the mandap and rituals like kanyadaan (or kanyavaran), Granthi Bandhan (tying of knot of sari with groom's shawl), mangal pheras, seven vows taken by the couple, exchange of garlands, havan, Shantipath and Visarjan.
After the wedding, the couple is blessed by everyone (Ashirwaadceremony). The bride is welcomed in the groom's house (Sva Graha Aagamana). Alms are distributed in the Jain temple and this is called Jina Grahe Dhan Arpana. The couple is formally introduced to everyone in the reception hosted by the groom's family. 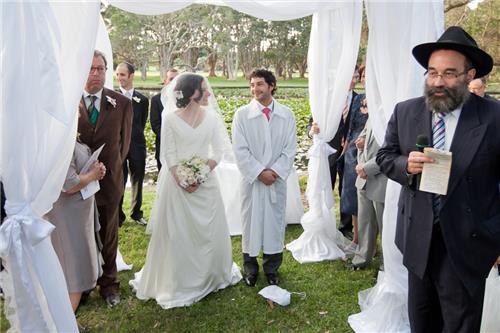 The Jewish wedding ceremony is known as kiddushin. The word 'kadosh' means holiness. The marriage is organized on a Tuesday. In Jewish religion, marriage is considered compulsory because they believe that a single person is incomplete.
Wedding comprises of two phases --- kiddushinor (engagement phase) and nissu'in (actual wedding). Rituals include Yom Kippur Viddui (prayer and forgiveness for the past by bride and groom). Kabbalat Patim is a ritual which forbids the couple from meeting each other for a week! During Badeken, the groom veils the bride and both see each other.
Wedding day comprises of many more rituals like Kiddushin (when bride circles around the groom seven times). The wedding takes place under a open canopy or chuppah. Drinking of wine by the couple, exchange of rings, Ketubah (written wedding contract signed by two witnesses), Sheva Berakhot (recital of seven blessings) etc.
After the wedding, it is time for Reception Party or Seudat Mitzwah with plethora of delectable dishes! Mitzwah dance takes place with everyone dancing happily around the couple. 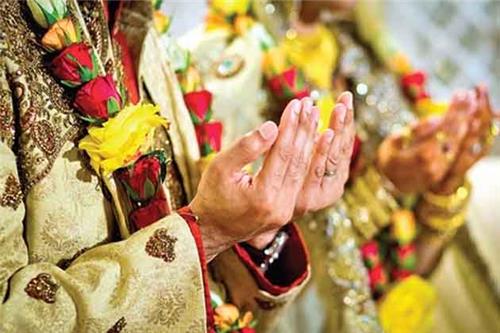 Muslim marriage is a contract between two individuals. Mangni takes place when the couple exchange rings and the marriage date is fixed. Mehendi ceremony is the time for decoration of palms and feet using mehandi.
Wedding day is filled with enthusiasm as the groom arrives with a musical band. The groom drinks sherbat with the bridegroom's brother and then the Nikah takes place in the presence of the priest (maulvi) who reads important verses from the Quran.
The ritual of Ijab-e-Qubul (proposal and acceptance) takes place. The groom sends proposal to the bride and marriage is solemnized only after the consent of the girl. Nikahnama is a document wherein the marriage contract is registered. 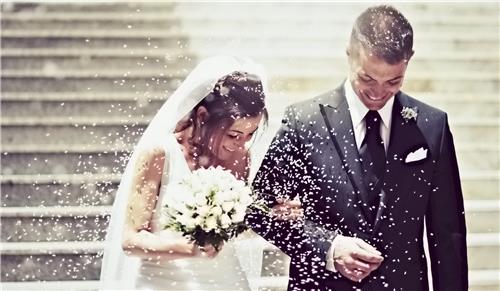 Christian wedding is organized in a Church and the best man (someone close to the groom) greets the bride with a bouquet. The bride's father accompanies her to the altar and after reading out verses from the Bible, in the presence of two witnesses, the groom and bride are declared husband and wife.
The groom repeats the wedding vows. Rings are exchanged between the couple. Both are blessed by the priest and they walk the aisle together. Everyone joins for a feast along with the cutting of the wedding cake. All present raise a toast in the name of the newlywed couple! 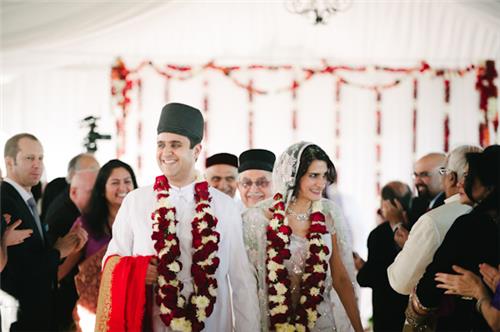 Parsi wedding is known as Achumichu or Lagan which is organized in a Baug or at an Agiary (Fire temple). Other customs are quite different from those practiced in Hindu marriages.
The rituals are filled with fun, and enthusiasm and are simple yet interesting! Pre-wedding rituals include Rupia Peravanu ceremony (engagement), Madhavsaro (families of both sides plant a tree in a pot which is kept at the entrance of the house and watered daily till the 8th day after marriage and then planted somewhere else), Adarni (groom visits bride's family with gifts), Supra nu Murat (just similar to haldi ceremony) and Nahan (purifying bath by the couple).
On the wedding day, Achumichu ritual is performed followed by Ara Antar (bride and groom sit facing each other with a cloth in between). The priest circles the couple 7 times with a string.
Oil lamps are lighted and prayer is followed by an exchange of rings by the couple. During Haath Borvanu, the groom's hands are dipped in a glass of water, milk was thrown on his shoes, and only after accepting gifts and money, the seven strands binding the couple are removed. 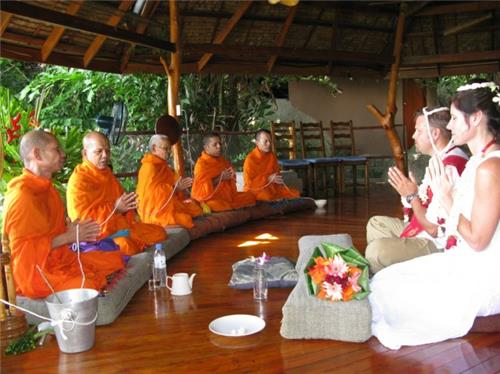 Buddhist wedding is more of a family affair. There are no feasts and matching of horoscopes in a Buddhist marriage. The couple along with family members visit the temple and seek blessings from the monks.

Form of Marriages in India

The vedic system recognizes various forms of marriage in India. These Forms of marriage are Brahmana, Daiva, Arsha (of the Rishis), Prajapatya, Gandharva, Rakshasa, Asura, and Pisacha. Marriage is termed as 'vivah' in Hindi. In Hindu marriages, Saptapadi defines the legal validity of the marriage.
This has been reiterated in the Hindu Marriage Act of 1955 (Article-7) also. In India, marriage is one of the biggest events in a person's life. And so this institution is protected by Indian marriage laws relating to marriage among Hindus and others.
43317