With spotlights flashing on the stage, from where appears a rainbow of emotions, the drama industry in India has gone through complete transformations, travelling through several eras.
In ancient times, it used to be the most sought after art, later it took many shapes and today it still exists though facing stiff competition from Television and Cinema. 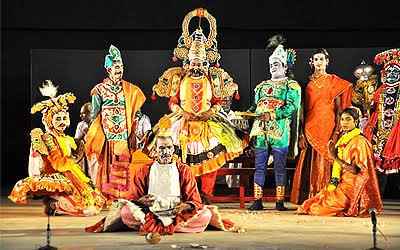 The theater world was introduced in India as Sanskrit theater, long time back in 2nd century. Sanskrit theater categorized Abhinaya or acting into two forms – Lokdharmi and Natyadharmi, the former referring to the realistic drama and the latter to conventional or literal form.
Kalidasa is revered to as the great dramatist of those times who produced Malvikaganimitram, Viktamuurvashiya and Abhijnanasakuntala.  Another great dramatist of those times was Bhavabhuti who wrote Uttar Ramcharita, Malati-Madhava and Mahaviracharita. The plays portrayed lives of ancient sages and Gods. They used to be inspiring based on Dharma. 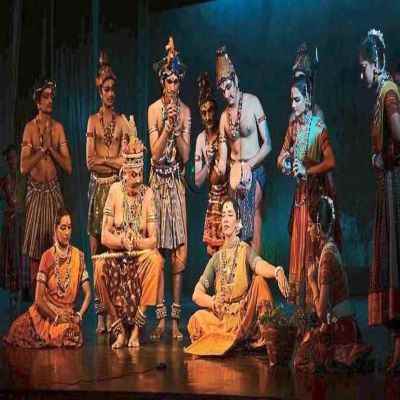 Being the major source of entertainment then, the industry stayed stable till the 10th century, as till then there was peace everywhere. During those days the theater world flourished, prospered entertaining at every level.
But by the beginning of 11th century when Islamists started overpowering the sub-continent, the industry got a huge setback as they objected to it, considering it strictly forbidden.


The emergence of Village Theater in India 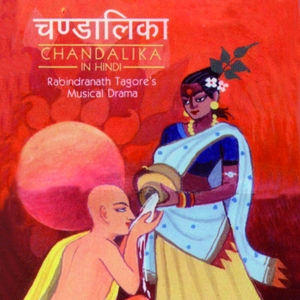 Later the art emerged again, but this time in the form of village theater. Practiced in villages of various states, it began in 15th century and developed in many regional languages till the 19th century, after which began the modern version of theater during the British reign.
This period, noted Bengali poet and playwright Rabindranath Tagore wrote many inspiring plays based on materialism, patriotism, spiritualism and intellectualism.
He also wrote Chitra, The King of the Dark Chamber, Red Oleander and The Post Office. Other popular playwrights are Girish Karnad, Vijay Tendulkar and Mahesh Dattani. An act, the Dramatic Performances Act 1876 was then imposed by the British government. 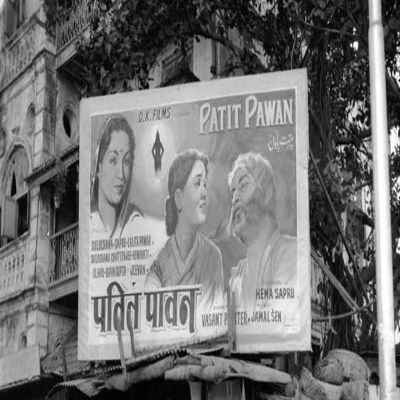 After independence in 1947, the drama and theater industry took a turn and saw a big boom. At the time, when there was not much television and cinema, drama was one most important modes of entertainment for people, who could relate to it very well and enjoyed it.
A popular playwright during this phase was Mrityunjay Prabhakar, who worked with many theater groups and became the founder of the theater groups Abhiyan and Society of Education, Harmony, Art, Culture, and Media Reproduction (SEHAR). 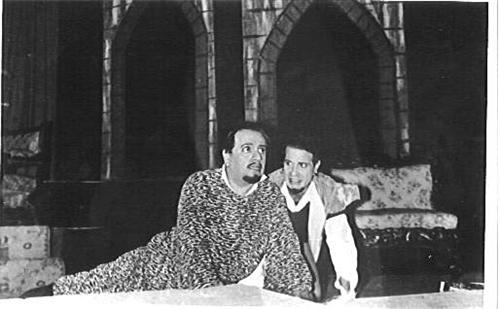 During the British era, the theater in India was used as a mode of revolution against the British. It was highly condemned and objected by the government.
Yet it got a new shape, blended in contemporary drama. After the independence, the further addition of ingredients like realism gave a different shape to what we today call - the Modern Theater.


Commercialization of an Art Form

Earlier the theater was just meant to entertain the royal and the authoritative. But the modern theater that already started taking shape in 1850s started charging for tickets as it was not under control of the powerful anymore.
Gradually, it was commercialized completely rather than just being a mode of free entertainment for those in power. It became a permanent profession for the performers who earned their bread through this only.


Modern Indian Theater Gets a Boost

As the freedom movement in India gripped the entire nation, the India People’s Theater Association (IPTA), a part of Communist Party of India was founded in 1922.
Through the association, many political agendas were raised and brought to light. The establishment played a pivotal role in awakening an inspiring the masses to struggle.

With the establishment of Sangeet Natak Academy in 1953, the theater industry was taken to a step ahead, with a broader approach. It became a mixed form of the Sanskrit theater and Contemporary theater along with new techniques. The plays were written in various languages. 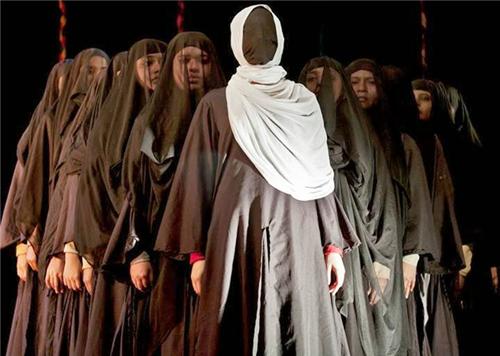 In 1972, the play ‘Ghashiram Kotwal’ by the Marathi playwright Vijay Tendulkar gave it a new dimension, in which he presented the traditional drama in modern style.
Later, the theater group ‘Range Karme’ launched in 1976 by a couple Usha Ganguly and Kamal Ganguly got international fame through its play ‘Bitter Harvest’. This was first group to reach to those heights.

By late 20th century, not only the Bengali, Tamil and Marathi theaters were performing but also the Gujarati, Hindi, Kannada, Oriya and Urdu theaters became active.


Advent of Street Theater in India 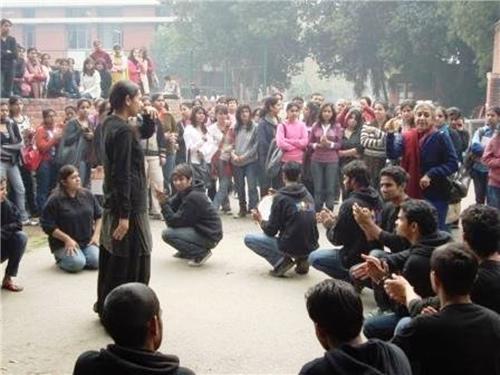 Later to reach to every nook and corner of society, not letting a single patch stay unaware, the concept of street drama came into practice.
This broke the boundaries of an enclosed theater, stage and gallery and was performed in open. The street theater is quite prominent. It stays mobile and thus has earned enormous recognition and response from the masses.

Today, the theater presents a very practical approach to life. Gone are the days when heroism was portrayed as a major characteristic of the subjects like Gods, supernatural humans, the kings and the powerful.

The modern day theater highlights the day to day life of ordinary people, who do their Karma, believe in Kismat, suffer for their fate and are very mortal.
The stories are very realistic and presented in a very natural way, to which we can relate very well. And this is how they touch our hearts, laying an ever-lasting impact. The street theater is quite prominent these days. It stays mobile and thus has earned enormous recognition and response from the masses. 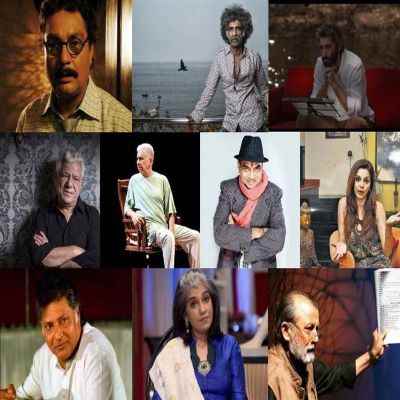 After independence, the drama industry got a new face. The renowned theater personalities like Utpal Theater personality of IndiaDutt, Shambhu Mitra, Badal Sarkar, Girish Karnad, Smita Patil, Shabana Azmi, Naseeruddin Shah, Shankar Nag and Safdar Hashmi added the contemporary touch to Indian theater.
Even though the transformation had started much earlier during the British rule, yet now it became modish by pin-pointing the social and political issues directly.

Another shining name in drama industry is Zohra Sehgal, who showcased her acting brilliance in Indian drama for quite a long time. She remained part of IPTA through its several plays.
She performed in various parts of India and for various social circles including the jail inmates in Firozepur. She also became part of Television and Silver Screen, by debuting in Dharti ke Lal, that won her accolades.
Surekha Sikri, better known as Dadi Saa, is yet another pioneer name in Indian drama and television industry.  A graduate from National School of Drama, this lady genius is a proud winner of National Film Award for and Sangeet Natak Academy Award for her exemplary roles in Tamas and Balika Vadhu, respectively.
Other great names in Indian theater are Pankaj Kapoor aka Karamchand, Raghubir Yadav aka Mungeri Lal and Rajpal Yadav. They have given a new dimension to theater and television, with their extraordinary talent in playing the roles of ordinary men.

Despite the immense recognition and honor that Indian drama industry has earned, its sad state lies in the fact that people tend to leave the industry to join Small Screen and Bollywood for ‘better’ opportunities, exposure, great returns and quick fame.
Read more Film Industry in India
62819