Embellishment of persona has always been one of the major attributes of Indians. Jewellery has been a trend as ancient as 5000 years back. Jewellery and Indian women has always been a great combination and it would be a rare sight to see an Indian woman sans jewellery.

Indian jewellery portrayed richness in ancient past and were worn by both men and women during the ancient past. The ornaments available were made from gold, silver, ivory, copper, beads and pottery.
The designs of Indian jewellery however took a different turn with the coming of the Sunga dynasty and a more refined approach witnessed towards jewellery making. Frequent use of gold and precious stones like ruby, sapphire, crystals, coral, agate were employed. And finally the whole concept and designs of jewellery changed with the Mughal invasions.
Indian jewellery was structured with a hybrid of Iranian and Hindu influences, during the reign of Akbar and when Jahangir came to the throne, he introduced rather softer designs.
Shah Jahan was attracted by the designs of the Dutch jewellery and it is in this period that various jewelleries for arms, hands, legs, turban, neck and face were introduced. Rajasthan since past was the place for gold jewellery and in addition to that the Rajputs also were seen to contribute their authority in creating jewellery.
Indian jewellery in modern times however saw a drastic change and certain ornaments have touched the height of popularity and thus emerged as the most used jewellery.

Indian jeweleries comprises of nose rings, earrings, rings, bracelets, anklets, necklaces,  amulets and many more. It ranges from religious to purely aesthetic types and is crafted not only for humans but also for the Hindu Gods and Goddesses.
Different regions in India have their uniqueness in jewellery making styles, Jaipur is famous for its delicate art of meenakari or enameling, Orissa and Andhra Pradesh is known for its fine filigree work in silver, the Kundan or the setting of semi precious or precious stones in gold from Delhi are now famous around the world.
The wide variety of silver beads found all over India, especially in Rajasthan, Madhya Pradesh, Gujarat and Himachal Pradesh are also well known.
Materials like Resin, glass, artistic pieces from Kundan are used in making Indian jeweleries. Some major types of Indian jeweleries include south Indian jewellery, antique jewellery, temple jewellery and North Indian jewellery. Antique jewellery is also used in modern day jewellery in gold or silver, which goes through a process of oxidizing and is sometimes buried in a pot of clay, to give it a dull look.
Indian jewellery is stylish and is not restricted only to a single metal. Manufacturers use all materials, ranging from plastic and glass to white metal, cheaper alloys and fabric. India has been a major manufacturer and exporter of jewellery in recent years.
Apart from regular jewellery items that are worn by men and women on daily basis, special bijouterie is designed for special occasions like marriages, festivals, rituals and dances. 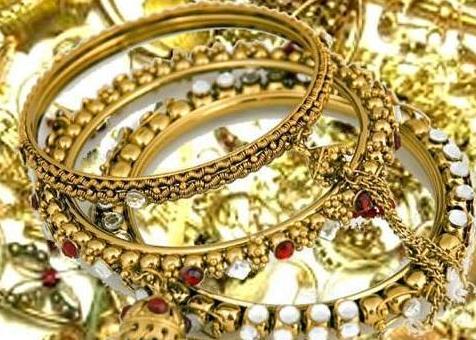 In India, jewellery is not just a means of adding glitter and attraction to the personality.  Infact, it holds tremendous significance, especially for women. It is customarily worn as a mark of auspiciousness to invite good omen.
It is also believed to strengthen various religious beliefs and for social security. Earlier both men and women used to wear ample of them but with the passage of time, men don’t really seem to be keen on wearing them..

For a woman in India wearing jewellery signifies the status of the woman in society. For example, a woman wearing Mangalsutra, chooriyan, bichiye and maang-tika is identified as married. She wears them the moment she is declared as married, following certain marriage rituals like Mangalya Dharanam.

Similarly, the khandani jewellery like Patli haar or Rani haar holds lots of traditional significance for being passed on from one generation to another.  There are many forms of Indian jewellery that have been in use during various eras, in various regions, by different communities on various occasions. 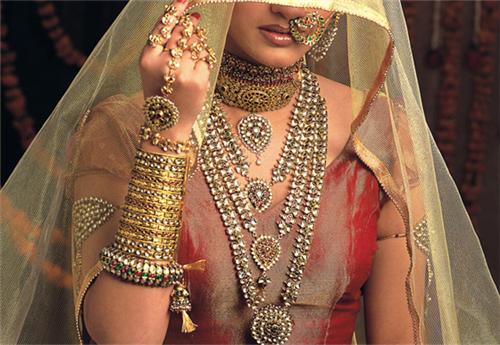 A bride is gifted with lots of jewellery from her parents, in-laws and close relatives. Even now, the most common metal used for making bridal jewellery continues to be gold. Some of the gold-jewellery is stuffed with lac to give them a ‘solid’ shape and look.

In ancient times when gold was not mined, copper and its alloys - bronze and brass, were much in use for jewellery-making. Those times are referred to as Bronze period.
With unique earthly looks, the copper jewellery holds lots of significance owing to its balancing quality. Copper is directly associated with Venus and is also known to be a soother and reliever from pain. 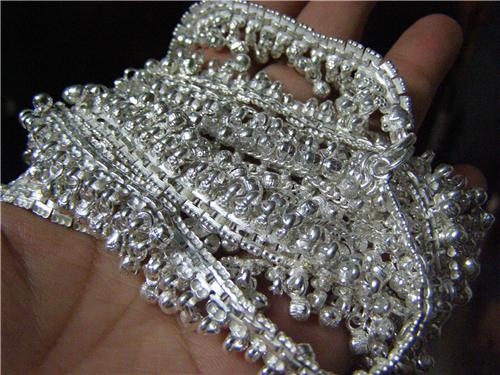 Not all ornaments are meant to be made of gold. There are certain ornaments like anklets, bichhiye that are not made of gold as the metal is not supposed to touch any part of the feet.

Silver jewellery is a trend also among the tribals. Their costume is incomplete without silver adornments. These days, the jewellery made of oxidized silver metal is much in demand due to the rough and rugged looks that it gives.


This kind of jewellery was introduced in India by the Mughals. The precious or semi-precious stones, beads and crystals are embedded in gold ornaments with complete precision and craftsmanship. The art requires an exceptionally amazing skilled touch and patience.
The jadau work involves designing, engraving, melting, filling and enameling. Jadau jewellery is prevalent in Rajasthan, Gujarat and Kutch regions. 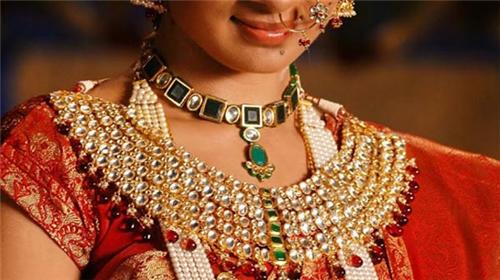 Kundankari of jewellery is prevalent in Rajasthan and Gujarat. The process involves making holes in the precious metal, engraving the gems and stones by setting them in these holes perfectly.
This kind of jewellery is rarely made of solid metal and is rather stuffed with Lac. Also known as ‘Jewellery of the Royals’, it has the stones like topaz, emerald, garnet, amethyst and rock crystal. 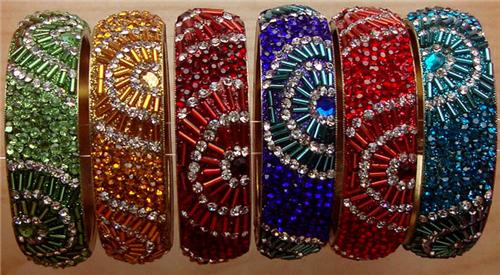 Lac is the natural resin that is used as a stuffing in the ornament. Originated from Rajasthan, this jewellery comes in various deigns and styles and is today much in trend. It is made of bright colors and shine due to the glass work done on them.
The people in Rajasthan believe that wearing Lac jewellery gives a positive impression and brings good fortune. The making of this form of jewellery requires heating of the things to be stuffed, then mixing them by kneading and making dough-like substance.


Meenakari work is usually done on the reverse side of a Kundan ornament, so that the ornament can be used from the sides. It is also done on all the ornaments. This jewellery art also belongs to Rajasthan which was introduced by Raja Mansingh.
The king called artisans and craftsmen from Lahore who along with the local craftsmen of Rajasthan came up with Meenakari jewellery. 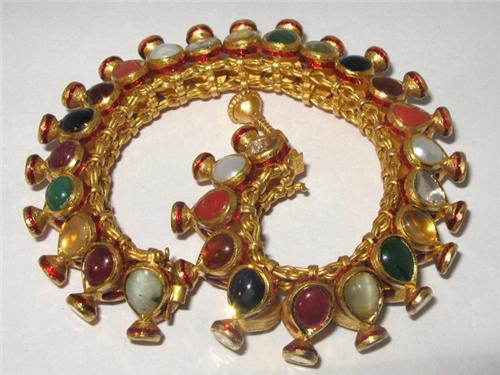 As the name signifies, this kind of jewellery requires the inclusion of nine types of ratnas or stones on a single ornament. These nine stones that are used in the jewellery are Diamond, Topaz, Emerald, Ruby, Garnet, Coral, Sapphire and Pearl.
Believed to be associated with various planets, all these stones are known to give power in some or the other way. Navratan jewellery comprises of ornaments like necklaces and ear-rings.

Pachchikam jewellery though gives crude and rugged looks, is pretty fragile in nature. Originated in the areas of Rajasthan, Gujarat and Kutch, this form of jewellery is made in Silver instead of gold and so is very affordable.
The Pachchikam jewellery is not that popular as Lac and Kundan jewellery because of its minimum production by a handful of artisans in remote areas.

The jewellery belongs to Odisha and parts of Andhra Pradesh. It is known for its delicate designs that are made by bending very thin wires that are hammered a number of times for thinnest look.
The filigiri work is not only used in jewellery making, but also in many decorative commodities like show-pieces, flower vases, spoons, trays, boxes, brooches, pendants and hair-pins. 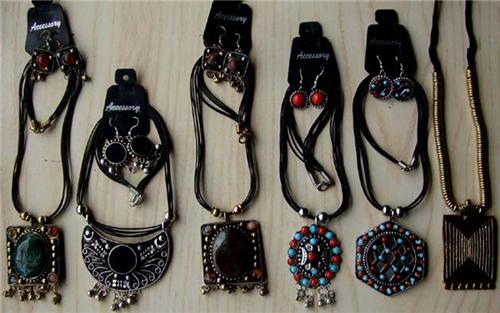 The jewellery made by tribal people of India, from available sources like elephant teeth, stones, sea shells, clay and bones is known as Tribal jewellery.
The Banjaras of Rajasthan, tribes of Bastar in Madhya Pradesh, tribes like Karka Gallong of Arunachal Pradesh, the Garo, Khasi and Jaintia tribals, the Jarawa tribals of Andamans and the Bhutias of Sikkim introduced this form of jewellery.
People love the ethnic look that is sported by these ornaments. The major attraction in this style of jewellery lies in its earthy, raw and rusty look which is now a trend for a perfect ‘Bindaas’ feel.

Apart from this, even in the present day fashion scenario, though the trends and styles seem to change with a blink of an eye yet, these forms of Indian jewellery always stay there on the ramp.
51124