The Indian subcontinent is divided on the basis of linguistic communities. 1600 dialects, at least 800 different languages and 22 official languages - this is the story of Indian languages.

Origin of Indian languages can be divided into two primary linguistic forms – the Indo-Aryan and the Dravidian. 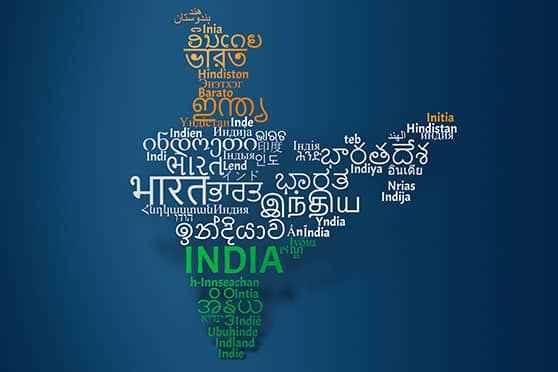 The Indo-Aryan branch is spoken by 74% of the population and Dravidian by 24% population. The rest 2% population speaks neither of the two forms.

These people come under the Austro-Asiatic and Tibeto-Burman linguistic families, as well as numerous other families. The Andamanese languages, spoken on the Andaman Islands, are apparently not related to any language family.

Article 343 of the Constitution recognizes Hindi in Devnagri script as the official language of India. Its homeland is mainly in the north of India, but it is spoken and widely understood in all urban centers of India. Hindi is a direct descendant of Sanskrit through Prakrit and Apabhramsha.

It has been influenced and enriched by Dravidian, Turkish, Farsi, Arabic, Portugese and English. It is a very expressive language. In poetry and songs, it can convey emotions using simple and gentle words.

It can also be used for exact and rational reasoning. However, the Constitution allows English to be used for all official purposes. The Dravidian set of languages are spoken in south India but is heavily influenced by Hindi and Sanskrit.

The following languages are recognized by the Indian Constitution: