Music today, has become an inherent part of socio-cultural life in India. It stirs the wave of emotions in us, making us happy, sad or even rejuvenated.
Be it whatever the scenario, Indian music goes well with it in some or the other  – Raag Malhar for the rains, Bhairavi for the morning, Eman  or Kalyani for the evening and Malhar for the night.
Indian music has travelled a long way to be what it is today and music is set for every mood for every celebration in India. 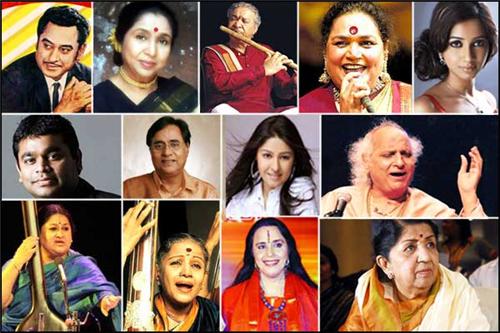 Imagine a magical ambiance constituted by the mesmerizing sounds of Sitar and Veena, the snapping of Tabla, the resonance by Mridanga and Pakhawaj, the auspiciousness of Shehnai, along with the simultaneous percussion and tinkling harmony by Ghunghroos – that sure, must have been the aura of ancient Indian palaces and royal chanceries.
The Indian classical music comprises over 300 Raagas, though just 100 of them are known and practiced now. The passionate indulgence into these ragas like Bhairavi, Malhar, Darbari, Khamaj brings about the finest of musical compositions
Classical singing has been part of the music since Vedic eras when even the religious hymns were sung. The Indian classical music is categorized into Hindustani and Carnatic music. The various genres of Hindustani music are Dhamar, Dhrupad, Tarana, Khyal and Sadra.
The Carnatic music, as the name suggests, is known to have originated from Karnataka, the south-Indian state. The father of Carnatic music is considered to be Puarandara Dasa of Karnataka itself. Other stalwarts of Carnatic music are Shyama Shastry, Tyagaraja and Muthuswami Dikshitar.

The semi-classical music of India is represented by the genres Ghazal, Dadra, Thumri, Tappa, Kajri and Chaiti. Ghazals are the most artistic means to open a heart in love or bits. Some of the notable ghazal singers are Jagjit Singh, Bhupinder Singh, Pankaj Udhas and Manhar Udhas.
Thumri expresses ‘Love for Krishna’ exclusively. Originated from the north-Indian state of Uttar Pradesh, they are sung in specific raagas like Bhairavi, Khamaj, Gara, Kafi and Pilu. T

Indian music is not just about the classical version. The other facets of music are a trail of folk music, Spiritual, Indi-Pop and Popular music, which refers to Film or Bollywood music.

The folk music represents the culture of where it originated from. It describes the way of life there, the people and their traditions. The tremendous cultural diversity of India has led to a decent range of Indian folk music that renders identity to the state it has come from.
The range includes Bhavageete, Dollukunita and Veeragase of Karnataka in down-south, Bhangra of Punjab, Bihugeet of Assam, Lavani of Maharashtra, the Uttarakhandi folk music, the Jharkhandi music, Panihari and Manganiyari music of Rajasthan, Dandiya Raas of Gujarat, the ancient Pandavani folk theatre music.

Stressed? Well, you can hold on to your perfectly blended cuppa and a set of earphones! The spiritual music will take you to a sojourn to the divine world where you can discover your inner self. Usually, the music is soft with chanting of mantras.
It can also be the fusion of classical and western music like – ‘Solitude’ by Karunesh, which is also suffused with Sufi music. The Sufi devotional music is known to squeeze out the stress from the soul and makes the person comfortably numb.
Another form of Sufi music is Qawwali is enjoyed by everyone. The highlight and distinguishing feature of Qawaalis lies in the way Qawaals make clapping sounds following various patterns.
Some of the esteemed Sufi singers are Nusrat Fateh Ali Khan, Raahat Fateh Ali Khan, Abida Paarveen and Rabbi Shergill. The trend of Sufi rock has also won over millions of hearts. Even Bollywood did not afford to miss the exaltedness of this genre.


The Most Popular - Bollywood ‘Filmy’ Music

The music of Bollywood has been ruling zillions of hearts – young and old. It presents a wide spectrum of music, including the western and the rock. However, the changing trends in this industry could not dim away some great names like Asha Bhosle, Lata Mangeshkar, Kishore Kumar and Mohammad Rafi.
Their voice became part of the life of a common listener. Some of the most loved and popular music composers of Bollywood are S D Burman, R D Burman, Naushad, Ilaiyaraja, Shankar Mahadevan, Pritam Chakraborty and the musical genius of today, A R Rehman.

The definition of Indian music keeps changing these days. With the changing styles, expressions, choices of genres, digitalization, advent of hybrid musical instruments, and influence of western music, the burgeoning industry of performing arts has reached a different level.
Classical and folk music has taken a back seat while fusion and mixes are on high, enjoying rhapsodies of praise by masses. In a quest for creativity and novelty, the present generation keeps on striving hard to bring about the best possible.

Click on the links, to listen to the beautiful rendition of various Indian singers:

For details of Indian musicians and singers, click here
49598