Businessmen and Enterpreneurs of India

Businessmen and Enterpreneurs of India

India today is one of the topmost names in the field of business. Anil Ambani, Mukesh Ambani, Kumar Mangalam Birla, Ratan Tata, Lakshmi Mittal Adi Godrej and Aditya Vikram Birla are the topmost business personalities in India. Know more about businessmen and entrepreneurs of India through our website. 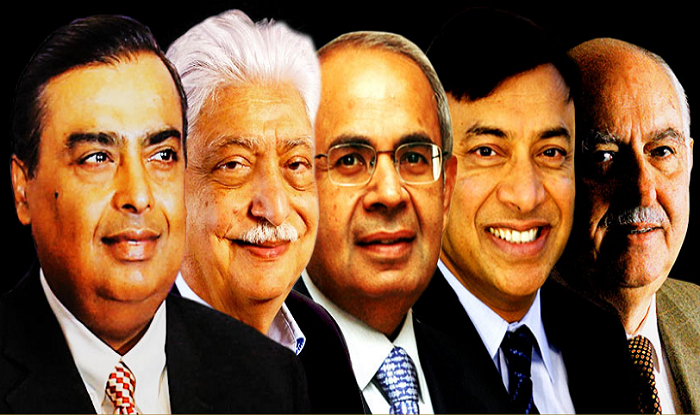 Adi Godrej: Adi Godrej is one of the icons of Indian Industry. He is the chairman of Godrej Group. The Godrej products were among the first indigenously manufactured products to displace entrenched foreign brands. Read More

Anil Ambani: Anil Ambani is one of the foremost entrepreneurs of Independent India. He is the Chairman of Anil Dhirubhai Ambani Group. He was chosen as the 'CEO of the Year 2004' in the Platts Global Energy Awards and MTV Youth Icon of the Year' in September 2003. Read More

B.M. Munjal: B.M. Munjal is the Chairman of the Hero Group. Today, Hero Group is the largest manufacturer of two-wheelers in the world. He was honored with Ernst & Young's Entrepreneur of the Year award in 2001. Read More

JRD Tata: JRD Tata built one of the largest industrial houses of India. He had the honor of being India's first pilot; he was Chairman of Tata &amp; Sons for 50 years. He launched Air India International as India's first international airline. He was honoured with Bharat Ratna in 1992. Read More

Lakshmi Niwas Mittal: Lakshmi Niwas Mittal is a British-based Indian steel magnate. He is the chairman and CEO of ArcelorMittal, the world&rsquo;s largest steelmaking company. Mittal is the richest man of Asian descent. He was ranked the sixth richest person in the world by Forbes in 2011, but dropped to 21st place in 2012.

M.S. Oberoi: M.S. Oberoi can be aptly termed as the father of the Indian hotel industry. He was the founder of the Oberoi Group of Hotels. He was honored with Padma Bhushan in 2001.

Mukesh Ambani: Mukesh Ambani is the face of new emerging India. He is the Chairman and Managing Director of Reliance Industries Limited, India's largest private sector company. He was chosen as ET Business Leader of the Year 2006. Read More

Naresh Goyal: Naresh Goyal is the founder Chairman of Jet Airways, India's largest domestic airline. He was the recipient of the first BM Munjal Award for Excellence in Learning & Development in the Private Sector category in 2006.

Rahul Bajaj: Rahul Bajaj is one of India's most distinguished business leaders and internationally respected for his business acumen and entrepreneurial spirit. He is the Chairman of the Bajaj Group, which ranks among the top 10 business houses in India.

Ratan Tata: Ratan Tata is presently the Chairman of Tata Sons. He has taken Tata Group to new heights and under his leadership Group's revenues have grown manifold. He was honored with Padma Bhushan, one of the highest civilian awards in 2000.

Sunil Mittal: Sunil Mittal can be called as originator of cellular phone revolution in India. He is the founder, Chairman and Managing Director of Bharti Group and runs India's largest GSM-based mobile phone service. He won the IT Man of the Year Award 2002 from Dataquest and CEO Of the Year, 2002 Award from World HRD Congress.
Gautam Adani: He is the chairman and founder of the Adani Group, an Ahmedabad-based multinational conglomerate involved in port development and operations in India
Shiv Nadar: S He is the founder and chairman emeritus of HCL Technologies Limited and the Shiv Nadar Foundation.
Radhakishan Damani:  He was founder of DMart. He also manages his portfolio through his Investment firm, Bright Star Investments Limited.
Cyrus Poonawalla:  He is a chairman and managing director of the Cyrus Poonawalla Group, which includes the Serum Institute of India, an Indian biotech company which is the largest vaccine manufacturer in the world.
Lakshmi Mittal: He is the Executive Chairman of ArcelorMittal, the world's largest steelmaking company, as well as Chairman of stainless steel manufacturer Aperam.
Savitri Jindal: She was the chairperson emeritus of O.P.Jindal Group. She is also the president of Maharaja Agrasen Medical College, Agroha.
Uday Kotak: He is the Managing Director of Kotak Mahindra Bank. On 22 March 2003, Kotak Mahindra Finance Ltd. became the first company in India’s corporate history to receive a banking license from Reserve Bank of India.
Kumar Birla: He is the the chairman of the Aditya Birla Group, one of the largest global conglomerates in India. He is also the chancellor of the Birla Institute of Technology & Science and Indian Institute of Management Ahmedabad.

Other famous entrepreneur in India are :