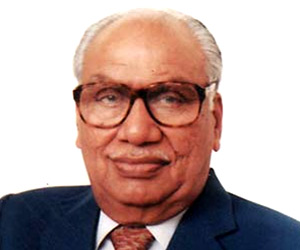 B.M Munjal was born in 1923 at Kamalia district Toba Tek Singh in unpartitioned Punjab in British India. Munjal worked at the Army Ordnance Factory after completing his formal education.
Munjal is a first generation entrepreneur who started very small and through sheer hard work and perseverance made it to the top. Fondly known as Lalaji among workers, hamaara hero among suppliers and BM to his Japanese partners and friends.
He established the Hero Group which is today the largest manufacturer of two-wheelers in the world. In the year 1986 Hero Cycles Limited entered the Guinness Book of Records as the largest manufacturers of bicycles in the world. In January 1984.
Munjal left home when he was 20 to make bicycle parts. Munjal travelled the globe in search of markets, technology and equipment. In fact, Germany became his second home in those days.
Munjal shifted to Amritsar and then Ludhiana in 1944 (before India’s independence), where he got the licence from the Punjab government. He set up a factory to make cycles from where Hero Cycles was born.
To Read More, Click Here.