Cricket is the most loved sport in India. Cricket is like religion to the Indians and cricketers like God. India has been a hub of some of the finest cricket players in the world.
When we say cricketers the instant names that comes to our mind are Sachin Tendulkar, Kapil Dev, Yuvraj Singh, Anil Kumble, Rahul Dravid, Saurav Ganguly among others.
This page will give you a detailed information about cricketers in India. Explore more about the famous cricket personalities of India. 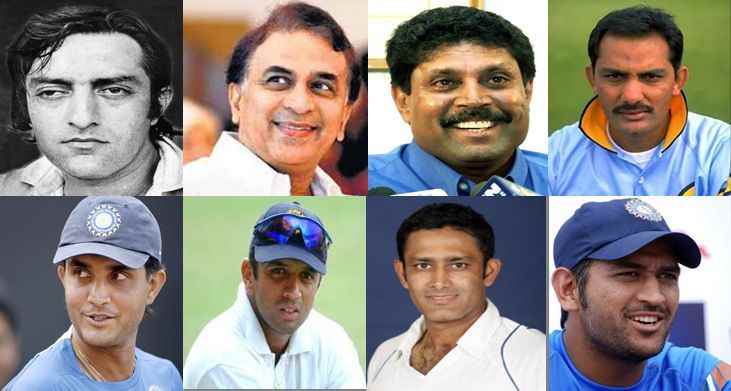 Ajit Wadekar: Ajit Wadekar is a former Indian cricketer who played for India from 1966 to 1974. Often referred to as a very aggressive batsman. Read More

Anil Kumble: One of the best bowlers that India has ever produced, Anil Kumble was a right-arm leg spin bowler. Read More

Bishan Singh Bedi: Bishen Singh Bedi, born on 25 September, 1946 was a national team cricket player who was primarily a slow left-arm orthodox bowler. His presence in the Indian test team was felt from the year 1966 to 1979. He was also the Indian team captain in 22 test matches. Read More

Dilip Vengsarkar: Known as the Colonel, Dilip Vengsarkar was one of the important members of the Indian team during the late 70s and early 80s. Read More

Gautam Gambhir: More popularly known as Gauti by his friends and co-cricketers, Gautam Gambhir is one of Indias treasured discoveries. He is a left-handed opening batsman who also plays in the middle at times, has proved valuable to the Indian team many a times. Read More

Mohinder Amarnath: Born on 24 September, 1950, Mohinder Amarnath was a former Indian cricketer and a current cricket analyst. Most commonly known as Jimmy he is the son of Lala Amamrnath who was a post independent captain of India.Read More

Rahul Dravid: Rahul Dravid is a former Indian cricketer and was the captain of the Indian Test and One Day International teams. Dravid was named one of the Wisden cricketers of the year 2000.  Read More

Ravi Shastri: A former Indian cricketer as well as the captain, Ravi Shastri was an all-rounder who batted right-handed and was a left arm spin bowler.Read More

Sachin-Tendulkar: Born on 24 April, 1973 Sachin Tendulkar  is an Indian cricketer who is not only considered the God of Indian cricket but also a worshipped batsmen around the world. Read More

Sunil-Gavaskar: Sunil Gavaskar aka Sunny is a former Indian cricketer, who has left his mark in the field of cricket with his superb batting skills. He set the world record for the most number of test runs and most number of test centuries by any batsmen. Read More

Syed Kirmani: Syed Kirmani is one of Indias wicket-keepers who maintained his position in the indian team by doing his job really well. His debut was against New Zealand. As a batsmen also he showed his skills by giving some of the best performances in the Indian cricket tours.

Virender Sehwag: Virender Sehwag, born on 20 october, 1978 is one of the leading cricketers of the Indian Team. Also known as Viru and Nawab of Nazafgarh, he proved his worth in the Indian team since he stepped into the national team. Read More

Yuvraj Singh: Yuvraj Singh is an Indian cricketer. He has been a member of the Indian cricket team since the  year 2000. He is one of the best batsman and fielders that India has ever produced. Read More