Ajay Jadeja is married to Aditi Jaitley, the daughter of former Samata party Chief Jaya Jaitley and the couple has two children, Aiman and Aana. They live in New Delhi. 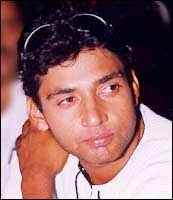 Ajay Jadeja is a right handed batsman and his bowling style is right arm medium, though he primarily is a batsman. Ajay Jadeja was a regular player in the Indian cricket team in between the years 1992 to 2000. He played in 15 Test matches and 196 One day Internationals.

He was also regarded as one of the best fielders of the Indian cricket team during his time. He was also mostly remembered for his quick hitting in the finishing overs in the late 1990s.

One of his most remembered innings was his cameo innings in the 1996 Cricket World Cup quarter final against the Pakistan team where he blasted 45 runs of 25 balls, including 40 from the final two overs by Waqar Younis. Ajay Jadeja along with Mohammed Azharuddin also holds the record for the highest one day partnership record for the 4th and 5th wicket, which was held against Zimbabwe and Sri Lanka respectively.

Jadeja is also considered as one of the safest pairs of hands in the Indian team during his time. Ajay Jadeja had captained India in 13 One day matches. One of his favorite hunting grounds was the Chinmaswamy Stadium in Bangalore which was also the venue of the quarter final against Pakistan in the 1996 World Cup.

The last time Jadeja played in a One day International match was against Pakistan in the Pepsi Asia Cup on 3rd June 2000. Jadeja was the top scorer hitting 8 fours and 4 sixes. However, Ajay Jadeja’s cricketing achievements were later scandalized by a 5 year ban on him due to match fixing.

The ban was later abandoned by the Delhi High Court on 27th January 2003 allowing Jadeja to play domestic and international cricket. Jadeja had approached the Delhi High Court on 2nd February 2001 challenging the five year ban by BCCI on the basis of the K. Madhavan Committee recommendations. Jadeja is currently the coach of Rajasthan and a cricket commentator. 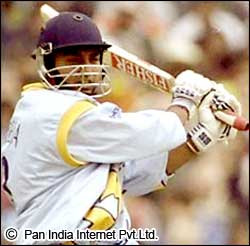 Ajay Jadeja acted in the 2003 movie ‘Khel’ starring along side Sunny Deol and Sunil Shetty, which was a total mishap. He also acted in the 2009 movie ‘Pal Pal Dil Ke Saath’ directed by V Krishna Kumar. His entrée into the film world was not at all a successful one.

Jadeja also worked for Zee news as a cricket anchor along with former Pakistan cricket captain Zaheer Abbas. They worked as the anchors during the 2003 ICC Cricket World Cup.

Jadeja later reprised the role for the 2007 ICC Cricket World Cup and also took up the role of cricket analyst for NDTV India and NDTV 24*7. Ajay Jadeja was also a contestant on the celebrity dance show 'Jhalak Dikhla Ja' in the first season and appeared in the TV show ‘Comedy Circus’ as well.

Ajay Jadeja was honoured with the Arjuna award for his contribution in the field of Cricket in the year 1997.