Ajit Wadekar was a former cricketer who played for India between 1966 and 1974. Known as an "aggressive batsman", Wadekar was considered to be one of the finest slip fielders.
He also captained the Indian cricket team which won the series in England and West Indies. He was awarded the Arjuna Award and the Padmashri for his contribution to cricket. 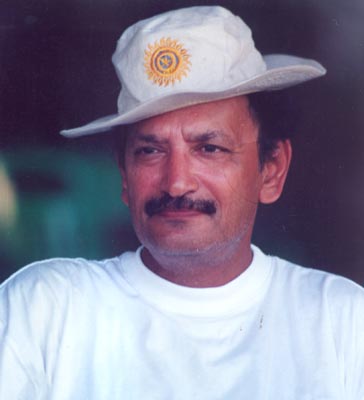 Ajit Laxman Wadekar was born on 1 April 1941 in Bombay. Wadekar from his childhood was interested in cricket. He made his first-class debut for Bombay in 1958–59. He played for India between 1966 and 1974.
He made his international debut in Test in December 1966 against the West Indies at the Brabourne Stadium in Bombay. Later he became a part of the regular team and played 37 Test matches for India between 1966 and 1974. He batted at Number three position and was considered to be one of the finest slip fielders.

Wadekar also captained the Indian cricket team which won the series in England and West Indies. Wadekar was appointed the captain of Bombay and soon was made the captain of the Indian cricket team in 1971.
He led a side that included players like Sunil Gavaskar, Farokh Engineer, Gundappa Viswanath and the Indian spin quartet that included EAS Prasanna, Bishen Bedi, Bhagwat Chandrasekhar and Srinivasaraghavan Venkataraghavan.
Wadekar became the first Indian captain to achieve overseas wins while touring the West Indies and England in 1971. In the early 1970s India won over five matches in the West Indies and then defeated England in three matches.

Wadekar led India to a third successive series victory, beating England cricket team 2–1 again in a five-match series in 1972–73.
He continued to be the captain of the Indian team that toured England in 1974 and represented India in its first ever One Day International game during the tour. Wadekar batted at "number three" and made 67 runs but ended on the losing side.

Wadekar scored 73 runs in his ODI career at an average of 36.50 with a strike rate of 81.11. He retired from international cricket following India's dismal performance in the series.
Wadekar played just one more First-class match before retiring from all forms of cricket. In the 1990s Wadekar served as the manager of Indian Cricket team alongside captain Mohammad Azharuddin. Wadekar is one of the few Indians to represent the country as Test player, captain, coach/manager and the chairman of selectors.

Awards and recognition of Ajit Wadekar

Ajit Wadekar was given many awards and recognition for his contribution to cricket. The Government of India honoured him with the Arjuna Award in 1967 and Padmashri in 1972, India's fourth highest civilian honour.
He also received CK Nayudu Lifetime achievement award, Sportsperson of the Year and the Castrol Lifetime Achievement award.
918