Anil Kumble is a former Indian cricketer and captain of the Indian cricket team. Kumble was a  right-arm leg spin bowler and took 619 wickets in Test cricket. Kumble remained the third-highest wicket taker, behind Muttiah Muralitharan and Shane Warne, as of 2012. 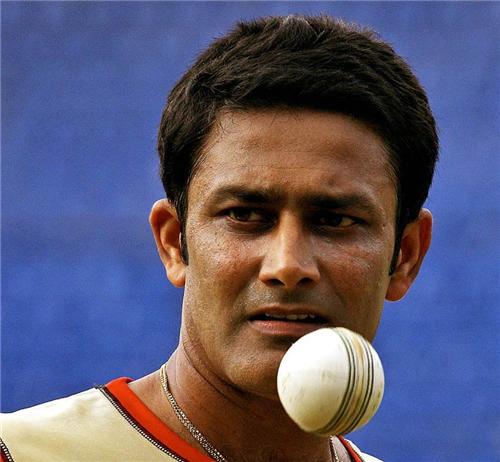 Anil Kumble was born on 17 October 1970 in Bangalore, Karnataka to Krishna Swamy and Saroja. He did his primary schooling from Holy Saint English School. He later attended National High School, Bangalore. Kumble was interested in cricket since his childhood and joined the club 'Young Cricketers' at the age of 13. He completed his pre-university college education from National College Basavanagudi and graduation from Rashtreeya Vidyalaya College of Engineering in Mechanical Engineering.

Anil Kumble developed an early interest in cricket as he grew up watching players on ground. Kumble made his first-class debut for Karnataka against Hyderabad on 30 November 1989 taking 4 wickets and bagging a pair. On 25 April 1990 he made his ODI debut against Sri Lanka at Sharjah in the Austral-Asia Cup before making his Test debut against England later that year. It was during the 1992 Indian tour of South Africa that he established himself as a quality spinner, taking eight wickets in the second Test. Kumble took his first 50 Test wickets in 10 matches, the record remained the fastest by an Indian bowler till Ravichandran Ashwin surpassed him achieving the feat in nine matches. He has represented the Indian Test team on more than 132 Test matches and was responsible for many of India's victories.

Kumble became a part of the regular ODI team during the early 1990s and held some of the best performances during this time including six wickets for 12 runs against the West Indies. The year 1996 proved to very successful for him as he was selected for the World Cup and emerged out as the most successful bowler of the tournament. He played seven matches and captured 15 wickets at an average of 18.73. In 1999 while playing against Pakistan Kumble dismissed all the ten batsmen in a Test match innings. Kumble then became one of only two bowlers ever (the other being Jim Laker) to have taken all ten wickets in a Test innings, taking 10 for 74. On 6 October 2004 Kumble became only the third spinner in the history of Test cricket to capture 400 Test wickets (after Shane Warne and Muttiah Muralitharan and the second Indian bowler after Kapil Dev). Kumble also holds the world record for trapping most batsmen leg before wicket. On 10 December 2004 Kumble became India's highest wicket taker when he trapped Mohammad Rafique of Bangladesh to surpass Kapil Dev's haul of 434 wickets.

In November 2008 he announced his retirement from international cricket. Kumble was appointed the chairman of International Cricket Council cricket committee in October 2012. In January 2013, Kumble accepted the role of Chief Mentor with the Mumbai Indians, resigning from a similar position he held in the Royal Challengers Bangalore.

Awards and achievements of Anil Kumble

Anil Kumble received many awards for his contribution towards cricket. In 2005 he was awarded the Padma Shri, India's fourth highest civilian honour. He was awarded the Arjuna award in 1995. Kumble is a right-arm leg spinner with an unorthodox style and is most famous for his flipper. He is a right-hand batsman. He is one of the 4 bowlers (alongside Richard Hadlee, Shane Warne and Muttiah Muralitharan) and the only Indian bowler ever, to have taken 5 wickets in a Test innings more than 30 times. Kumble also holds the world record for the largest number of caught-and-bowled dismissals in tests, 35 – which forms 5.65% of his total wickets. Anil Kumble is nicknamed as "Jumbo" because of his deliveries, which are as fast as a jumbo jet and also that his feet are quite big or "Jumbo" as observed by his team-mates.
714