Bishan Singh Bedi is a former Indian cricketer. He was a slow left-arm orthodox bowler. Bedi played Test cricket for India from 1966 to 1979 and formed part of the famous Indian spin quartet. 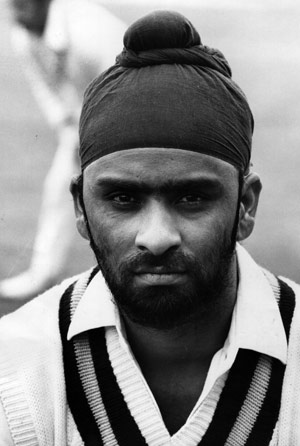 Bishan Singh Bedi was born on September 25, 1946, at Amritsar in Punjab. Bedi first played for Northern Punjab at the age of fifteen. He moved to Delhi in 1968–69 and in the 1974–75 season of the Ranji Trophy he took a record 64 wickets.
He also represented Northamptonshire in English county cricket for many years. Bedi finished his career with 1560 wickets in first-class cricket—more than any other Indian. Bedi's bowling has been described as beautiful, graceful and full of artistry.
Bedi was an expert in flighting the ball and was capable of making it hold back or hurry forward and added subtle variations of spin. He had several very successful Test series.
His best Test bowling was 7/98 against Australia in Calcutta in 1969–70. His best match figures 10/194 at Perth in 1978–79, also against Australia. Bedi's best first class bowling was 7/5 for Delhi vs Jammu and Kashmir at New Delhi 1974–75.

In 1976 Bedi was appointed captain of India succeeding Mansoor Ali Khan Pataudi. And his first Test victory as captain was against the West Indies at Port-of-Spain in the 3rd Test of the 1976 series in which India scored a then-record 406 in the fourth innings.
Bedi had a brief stint as coach of the Indian national team in 1990 making him the first person to be appointed to this job in a full-time capacity.

Bedi holds the world record for the most economical bowling figures in a 60-over ODI match amongst the bowlers who had completed their quota of overs. In the 1975 World Cup when the bowlers were allowed to deliver 12 overs Bedi finished with 12-8-6-1 against East Africa at Headingly.
692