Krishnamachari Srikkanth is a cricketer and former captain of the Indian cricket team. Also known as Kris Srikkanth, he was the former chairman of the selection committee. Srikkanth represented Tamil Nadu in the Indian domestic circuit. 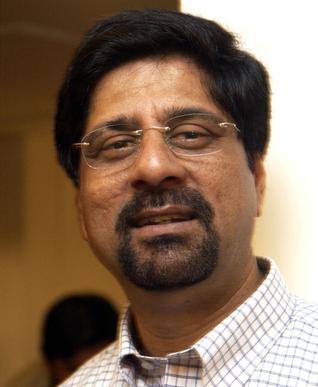 Krishnamachari Srikkanth was born on 21 December 1959 in Madras, Tamil Nadu. He is an electrical engineer and graduated from College of Engineering, Guindy in Chennai. Srikkanth played domestic cricket for Tamil Nadu and South Zone. He made his One Day International debut in 1981 against England in Ahmedabad. The same year he made his Test debut against England at Bombay. Srikkanth opened the innings partnering Sunil Gavaskar. He was known for his aggressive batting style and was considered an early role model for opening batsmen. He was noted for his aggressive attacking strokes. He was known to take risks even in the early part of the innings.

Srikkanth was an integral member of the Indian squad when they won the 1983 Prudential World Cup and 1985 Benson & Hedges World Championship of Cricket. Srikkanth top scored for India in the 1983 World Cup final against the West Indies. In 1989 he was made the captain of the Indian team. The cricketer remained the captain of the team for India's tour of Pakistan in 1989. Srikkanth played 43 Tests for India. In ODIs he played 146 matches. He also bowled off spin in ODIs.

Srikkanth was the first Indian player to score a half-century and pick up 5 wickets in One Day International against New Zealand at Vishakapatnam in 1988. The player retired from international cricket in 1993. Post retirement he had a stint as the coach of the India 'A' team. Srikkanth has been a broadcaster and commentator with various sports and news channels. He was named the ambassador for the Chennai Super Kings franchise of Indian Premier League in 2008. The same year he was appointed the Chief Selector of the Indian Cricket team.
1723