Mohammad Azharuddin is a former Indian cricketer. An accomplished batsman, Azhar had been the most successful captain of Indian cricket team of his time in the 1990s. 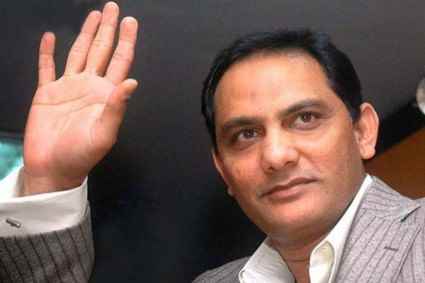 Mohammed Azharuddin was born on 8 February, 1963 at Hyderabad in Andhra Pradesh to Mohammad Azizuddin and Yousuf Sultana. Azhar completed his schooling from All Saint High School and graduated from Osmania University, Hyderabad.
Azhar was very interested in playing cricket since his childhood. He made his entry into Indian Cricket in 1984 and then there was no looking back for this great Indian cricketer.
He is married to former Miss India Sangeeta Bijlani and has two sons. He joined the Indian National Congress in 2009 and is an MP from Moradabad of Uttar Pradesh. At present he is holding the position of Working President of Telangana Pradesh Congress Committee.

Mohammed Azharuddin is one of India's most accomplished right-hand batsmen. He made his entry into Indian Cricket in 1984 and continued to step up on the glorious path of success. He led the Indian Cricket Team for most of 1990s and proved to be one of the most successful captain in the history of Indian cricket.
Azhar played 99 Test matches, 334 One Day Internationals, 229 First-Class matches and 432 List A matches. He played his last Test match against South Africa in Bangalore in March, 2000.

Azhar was selected in the Indian Cricket Team in 1984 and played his first Test match against England in Kolkata on January 5, 1985. Mohammed Azharuddin has many records to his credit and most of them are still intact.
Azhar is the only player in the world to have hit three consecutive centuries in first three Tests. He is the only player in the world to have taken 156 catches in One Day International Cricket.
He is the most successful Cricket captain in India ever to win the highest number of Test matches (14) and ODI matches (103) during his captaincy. He is the only batsman to hit fastest ever ODI century by an Indian.

Azharuddin formally joined the Indian National Congress party on 19 February 2009. He won the 2009 Indian general election from Moradabad in Uttar Pradesh to become Member of Parliament of India.
Mohammed Azaharuddin had disclosed his intention to contest the 2019 elections from Secunderabad Parliamentary constituency in 2019. He is currently holding the position of Working President of Telangana Pradesh Congress Committee.

Mohammed Azharuddin was bestowed Arjuna Award in 1986. In 1987 he was awarded with Padma Shri. Azhar won Wisden Cricketer of the Year Award in 1991. In 2000 he received ICC Champions Trophy.
986