Aluna Kabuini is a tribal Kabui dancer based in Manipur. She is also a Ras exponent. She was the recipient of the Manipur State Kala Academy Award in 2001-2001 for her contribution in the field of Tribal Kabui dance. 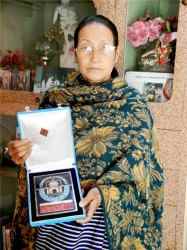 Aluna Kabuini was born in 1946 at Keishamthong Kabui Khun in Manipur. She was born to Gaithorung Kabui and Gangmei Athoi Kabuini. Her father was a Kabui Drama artist.
Since her childhood she was interested in dance and songs. Currently she acts as the main role in Kabui Naga Dance and Drama centre’s drama show “Yathang”. She is now a retired Guruhan of Jawaharlal Nehru Manipur Dance Academy.

Aluna Kabuini started learning Kabui traditional dance songs and other modern songs at the age of 8 years from Keishamthong Kabui Naga Dance and Drama centre.
She underwent training under the guidance of many eminent teachers. She did a post graduate diploma course and three years diploma with scholarship from on dance from Jawaharlal Nehru Manipur Dance Academy. She became the first post graduate diploma holder among the tribal from the academy.

Aluna Kabuini is both a Ras and Kabui dancer. She performed at various places of the state as Ras and Kabui dance leading artist.
She has participated in several festivals and programmes under the arts and Culture of India Government. She has performed in and outside the country, including in Washington, Canada, Mexico, New York, Chicago, London, France and so on.
She has performed in Guwahati, Delhi, Kolkata, Tamil Nadu and in other places of India. She has also written a book “Kabui Theory and songs”. Aluna Kabuini has also acted as a main actress in more than 10 short plays at All India Radio, Imphal produced by the Keishamthong Kabui Naga Dance and Drama centre.

Awards and  Recognitions of Aluna Kabuini:

Aluna Kabuini was the recipient of the Manipur State Kala Academy Award in 2001-2001 for her contribution in the field of Tribal Kabui dance.
1799