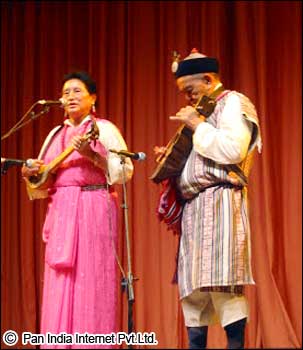 Hilda Mit Lepcha was born in the year 1956 in Kalimpong, Darjeeling in West Bengal. She is married to renowned Lepcha musician Sonam Tshering Lepcha.

In association with her husband, Hilda Mit Lepcha has been over the years making significant contributions towards the Lepcha traditional music.

Her placid voice has been a vehicle to promote Lepcha music. It has also been a way of keeping the primitive tribe’s distinct identity alive.

She along with her husband have travelled across the world and performed in a number of festivals organized by various institutions. Some of the festivals she has performed include the Apna Utsav in the year 1988, Lok Utsav in 1978, the Dweep Utsav in the Andaman and Nicobar Islands in the year 1993 and the World Music Day celebrations in 1998.
She has as excelled as a performer of traditional Lepcha musical instruments. She plays the rare musical instrument Tumbok while singing beautiful Lepcha songs. She has also trained a large number of artists of the region, making significant contribution to the promotion and preservation of Lepcha culture.

Hilda Mit Lepcha has been awarded the Sangeet Natak Akademi award in the year 2009 for her contribution to the Lepcha music of Sikkim. She has also been honored by several institutions of the region. She was conferred with Padma Shri Award in 2013.
3524