Jatin Goswami is a renowned Satriya dancer from Assam. He is a popular personality and has won a number of awards for his work relating to the development of Satriya dance.

Life and Career of Jatin Goswami: 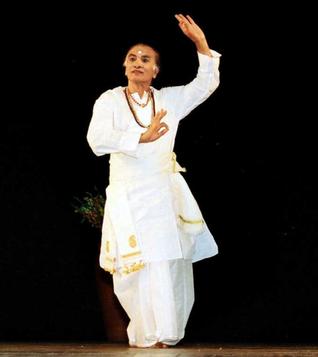 Jatin Goswami was born in the year 1933 in Dergaon in Upper Assam. Jatin Goswami started his first lesson of Satriya dance in his home under the guidance of his father.
Later on, he did his training in dance and music on the Vaishnava Satras by eminent gurus like Dharanidhar Goswami, Bishnu Prasad Rabha, Maniram Dutta Muktiyar and Late Roseswar Saikia Borbayan.
He is a distinguished teacher and a performer of Satriya dance and music. Since the year 1960, he has worked consistently for the propagation and development of Satriya dance.
He has also started a dance troupe for the promotion and development of the Satriya dance form. The dance troupe titled Pragati Kala Parishad was started in the year 1962 in association with the Kalaguru Bishnu Prasad Rabha and Roseswar Saikia Borbayan.

Awards and Recognitions of Jatin Goswami: