Ningombam Ibobi Singh was a pung drummer based in Manipur. He is ranked among the prestigious pung drummers for Manipur Nata Sankirtan. He received the Sangeet Natak Academy Award: Other Major Traditions of Music- Nata Sankirtan (Manipur). 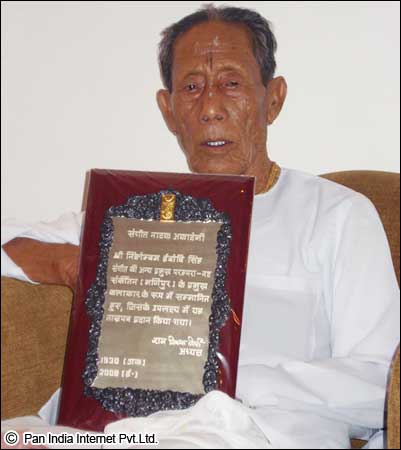 Ningombam Ibobi Singh was born in1920 at Imphal in Manipur.  Since his childhood he was trained in playing the pung for Nata Sankirtan performances by several teachers, including his father N Leirenjao Singh, Kh Selungba, Naorem Dhojo, Sangai Singh, Ch Chaoba, and L Koireng Singh.
He is a post graduate in pung-playing for Nata Sankirtan from the Jawaharlal Nehru Manipur Dance Academy in Imphal.
He is ranked among the prestigious pung drummers for Manipur Nata Sankirtan. He is also a reputed teacher.
He worked at the Parimal Academy in Mumbai. He also worked at the Shree Govindaji Nartanalaya at Imphal. He has trained several students who now perform with leading groups.
He has also contributed several compositions to the Manipuri repertoire of his own.He has published several books on Manipuri music.Ibobi Singh has participated in several seminars and workshops.

Ningombam Ibobi Singh was the recipient of the Sangeet Natak Academy Award: Other Major Traditions of Music- Nata Sankirtan (Manipur) in 2005.
He was recipient of the Manipur State Kala Academy Award in 2005 for his contribution to Manipuri culture. The Manipur Sahitya Parishad awarded him with the Vadya Bhushan title in 2001. The department of Information and Cultural Affairs, West Bengal also honoured him in 1981.
1298