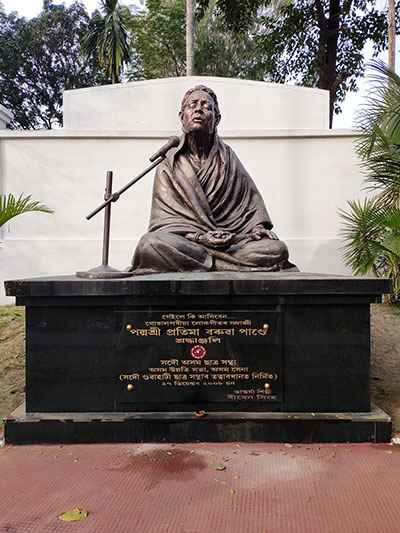 Pratima Barua Pandey was a popular folk singer from the royal family of Gauripur in Assam. Barua is a national awardee. She is credited for reviving the folk form singing in Assam.
She is best known for her immortal Goalparia songs “Hastir Kanya” and “Mur Mahut Bandhure”.  She was the niece of filmmaker Pramathesh Barua.
Life and Career of Pratima Pandey:
Pratima Barua Pandey was born on October 3, 1935 in Kolkata. She studied at Gokhale memorial school in Kolkata. She came to Assam and studied at the Girl’s High School, Gauripur. Barua had learned Rabindra Sangeet at school. However, she never took training in music.
The turning point in Barua’s life came when Bhupen Hazarika visited Gauripur once and heard her Goalparia geet at a local function.

He was highly impressed by her songs. He also made efforts that Goalparia geet became a part of the Assamese geet.
One of the famous song in his film “Era Bator Sur”. Dr Hazarika also took the initiative to broadcast the songs of Barua in 1961.Barua was also closely associated with IPTA.
She was a regular feature at the annual conventions of Assam Sahitya Sabha and All Assam Students Union. Barua also sang Paul Robenson’s “We are in the same boat brother” in stage shows. Barua was married to Gauri Shankar Pandey, a retired school principal. The Princess of Gauripur passed away in 2002.
The songs of Barua were a part of a cultural community, largely the Rajbobgshis. The Goalparia geet of Pratima Barua became extremely popular with the masses. Her most famous songs include “Aaji danrao kala”, “bail machhe kheil kare”, “Dhick Dhick”, “Dui diner bhalobasha”, “Ek bar hori bolo rasona”, “hastir kanya”, “komola sundari nache”, “matir manush”, “matir pinjira” amongst others.
Awards and Recognitions of Pratima Pandey:
Pratima Barua Pandey was awarded the Padma Shree and the Sangeet Natak Akademi for popularizing the Goalparia geet.“Hastir Kanya”, a documentary film, was made on the life and works of Barua by filmmaker Prabin Hazarika.
It won National Award for best biographical film in 1997. It also created waves at the South Asia Film Festival in 1998.
To Read More, Click Here.
2535