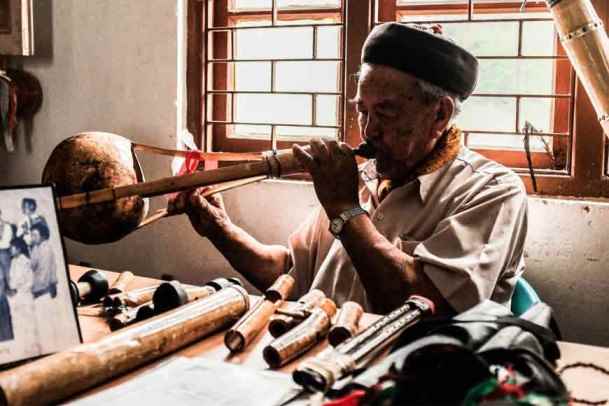 Sonam Tshering Lepcha was born on 3rd January 1928 in Bong Busty in Kalimpong, West Bengal. Currently a man in his 80s, he is known to his admirers as Rong Lapon (the Lepcha Master) and is credited with the revival of interest in Lepcha culture.  He died on 30 July, 2020 due to cardiac arrest

During his twenties, he started roaming the villages of Sikkim collecting songs, ancient musical instruments, artifacts and manuscripts.
He taught himself to play the instruments and made history in the year 1960 by becoming the first Lepcha to be heard on All India Radio.
During the 1960s, the young people of Sikkim made him a popular pop star by translating his songs and singing them.  According to him, his life’s work was motivated by the belief that a man without a culture is a man without a backbone, as such.
He extended his services to the development and promoting the Lepcha community.  Among his collection include a special flute which is used to imitate birdcalls and there is a violin like satsang.
In addition to the rare musical instruments like the banjo like tumbok, the museum also contains traditional Lepcha items like a coiled rope ladder for reaching bee hives and honey.
A contraption that fired heated clay bullets and a broad sword which was rather like a gigantic spatula and is useful for spanking than slashing an enemy. There are also ancient manuscripts in the museum.

Sonam Tshering Lepcha was awarded the prestigious Padma Shri by the Indian Government in the year 2007. He also received the Sangeet Natak Akademi Award in the year 1996.
17344