Surdas was a blind saint, poet and musician. He was known for his songs dedicated to lord Krishna. He wrote hundreds of songs in his magnum opus “Sur Sagar”. He is considered a saint and is known as Sant Surdas. 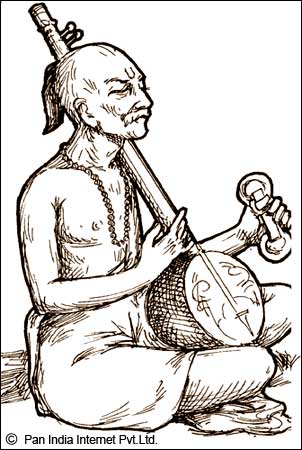 Surdas was born in 1478 at Faridabad in Haryana. He was born blind to a Brahmin family. Since his childhood Surdas was a devotee of lord Krishna. Surdas memorized the Bhagavat Geeta and other Sanskrit works at a tender age. He received religious training under sage Vallabhacharya. Under sage Vallabhacharya he received knowledge of the Hindu philosophy. Surdas left home at the age of 6 due to the neglect he faced at his home. He spent the last years of his life in Braj. There he lived on donations received on bhajan singing and delivered lectures on religious topics. He died in 1586.

Surdas is the brightest meteor in the sky of Hindi literature. Surdas wrote his magnum opus “Sur Sagar”. The collection of the composition in “Sur Sagar” is highly revered in the Hindi literature. He wrote thousands of songs in “Sur Sagar” describing about the life of lord Krishna. Surdas is also the writer of “Sur Saravali” and “Sahitya Lahiri”.
The poetry of Surdas was based on the Brij Bhasha. He is credited to lifting the value of the Hindi language. His use of the braj Bhasha transformed the dialect from crude to highly valued one.  His lyrics were directly addressed to lord Krishna. He was known for his songs dedicated to lord Krishna. His fame spread as a musician.  This made Emperor Akbar to become his patron.
Surdas was deeply immersed in the Bhakti movement. He was a proponent of the Shuddhadvaita school of Vaishnavism.
170