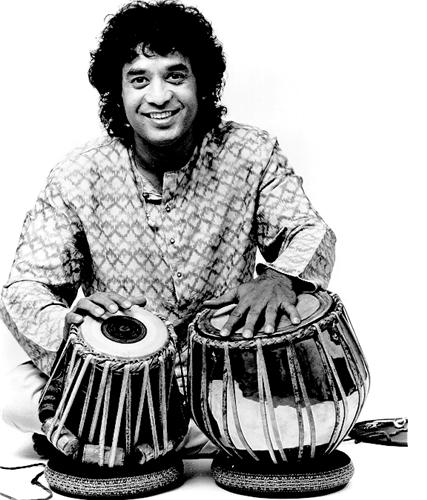 Ustad Zakir Hussain is a famous Indian Tabla player, musical producer, film actor and composer.
He is the son of the legendary Tabla player Alla Rakha. He is today appreciated both in the filed of percussion and in the music world at large as an international phenomenon.
A classical tabla player, Zakir Hussain's performances have established him as a performer nationally and internationally.
He is widely considered as a chief architect of the contemporary world music movement. In 1988 Ustad Zakir Hussain became the youngest percussionist to be ever awarded the Padma Shri by the government of India.
The government of India awarded him with the Padma Bhushan in 2002. He was awarded the Sangeet Natak Akademi Award in 1991 making him one of the youngest musicians to receive the recognition from India’s governing cultural institute.
His “Global Drum Project” and “Planet Drum“ won the Grammy Award. He composed and recorded many albums and soundtracks, and has received widespread recognition as a composer for his many ensembles and historic collaboration.

Zakir Hussain was born on March 9, 1951 in Mumbai. He is the son of the legendary Tabla player Alla Rakha. He attended St Michael’s High School in Mahim.
HE completed his graduation from St Xavier’s at Mumbai. The ustad married Antonia Minnecola, a Kathak dancer. He has two daughters Anisa Qureshi and Isabella Qureshi. 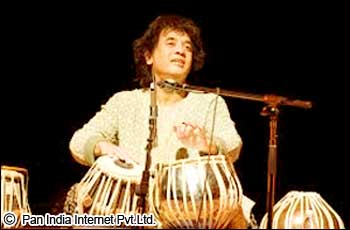 Ustad Zakir Hussain was touring by the age of 12. Beginning his international career in 1970 he went to US which includes 150 concerts dates a year.
He appeared on George Harrison’s “Living in the material world” album. He also took part in the Silk Road collaborative musical project.
He also participated in the Global Drum Project with percussionists from around the world.
In 1987 his first solo release “making music” was acclaimed as “one of the most inspired East-West fusion albums ever recorded.”

In 1992 he funded Moment! Records, which feature original collaboration in the field of contemporary world music, as well live music concert performances by the masters of the classical music of India.
The label presents his own world percussion ensemble “The Rhythm Experience” “Best of Shakti” and the “Masters of Percussion” series. Moments Records’ 2006 release “Golden Strings of the Sarode” with Aashish Khan and Zakir Hussain was nominated for a Grammy award for Best Traditional World Music Album category.

He has worked with John McLaughlin on Indo-Jazz projects including “Shakti”, “A handful of Beauty”, “making music”, “natural elements”, “Remember Shakti”, “The Believer” and so forth. He has also collaborated with  Mickey Hart non projects including”, ”Diga”, “Rolling thunder”, “Planet Drum”, “Global Drum project”, “At the Edge”, “Spirit into Sound” etc.
He has worked with Bela Fleck and Edgar Meyer. The piece titled “The Melody of Rhythm; Concerto” premiered in 2006. His recording credits include albums with Joe Henderson, George Harrison ,Van Morrison, Jack Bruce, Tito Puente, Pharaoh Saunders, Billy Cobham, the Hong Kong Symphony and the New Orleans Symphony. He teaches tabla to students in San Francisco and Mumbai.

Ustad Zakir Hussain starred and composed the score for the film “Heat and Dust”. He composed, performed and acted in the Malayalam film “Vanaprastham”. He has composed the soundtracks for several movies including “In Custody”, “The Mystic Masseur”.
He has played tabla on the soundtracks of “Apocalypse Now”, “Little Buddha” etc. He sang some of the songs and composed the soundtrack of the film “Mr and Mrs Iyer”.
He has also provided the music score for the film “Saaz” as well as acted in the film.The Ustad starred in the documentary film “Zakir and his Friends”, “The Speaking Hand: Zakir Hussain and the Art of Indian drum”.

Awards and Recognitions of Zakir Hussain:

In 1988 Ustad Zakir Hussain became the youngest percussionist to be ever awarded the Padma Shri by the government of India. The government of India awarded him with the Padma Bhushan in 2002. He was awarded the Indo-American award in 1990 for his contribution to relations between the US and India.
He was awarded the Sangeet Natak Akademi Award in 1991 making him one of the youngest musicians to receive the recognition from India’s governing cultural institute. He is the recipient of the 1999 National Heritage Fellowship, The US’ most prestigious honour for a master in the traditional arts.
In 2006 he was awarded the Kalidas Samman.His “Planet Drum” won the 1992 Grammy Award for Best World Music Album. “Global Drum Project” won the Grammy Award for Best Contemporary World Music Album in 2009.
2577