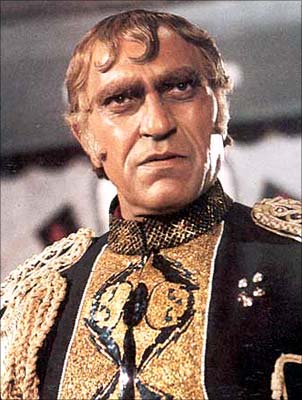 Amrish Puri was a theatre and film actor. Amrish Puri’s film career was particularly known for essaying negative roles in the Indian and international film industries. He was India’s favorite villain.
He is most remembered for essaying the role of “Mogambo”, a man out to destroy the world, in the Shekhar Gupta film “Mr India” and the international audience remember him as “Mola Ram” in the Hollywood film “Indiana Jones and the Temple of Doom”.
He has worked in more than 200 films. He has worked in Hindi, Tamil, Kannada, Telugu, Marathi, Punjabi, Malayalam and Hollywood films. He was the recipient of the Sangeet Natak Academi award in 1979.

Amrish Puri was born on June 22, 1932, at Nawanshahr in Punjab. He was born to Sardar Nihal Singh Puri and Sardarni Ved Kaur. Actors Madan Puri and Chaman Puri are the elder brother of Amrish Puri.
Amrish Puri graduated from BM College in Simla. He was married to Urmila. Amrish Puri died on January 12, 2005, following cerebral hemorrhage in Mumbai at the age of 72 years.

In a career spanning more than 30 years Amrish Puri worked in more than 200 films. He has worked in Hindi, Tamil, Kannada, Telugu, Marathi, Punjabi, Malayalam and Hollywood films.
Amrish Puri was particularly known for essaying negative roles in films. His dominating screen presence and his baritone voice made him a popular and one of the greatest villains of the film industry.
He was a key player of the Indian theatre Movement in the 1960s. He worked with famous playwrights like Satyadev Dubey and Girish Karnad.
He started performing at the Prithvi Theatre in the plays written by Satyadev Dubey. He later became famous as a stage actor. He won the Sangeet Natak Academi award in 1979. His popularity in theatre thereafter landed him roles in television ads and eventually in films at the age of 40 years.
His most popular character in the film industry was the role of “Mogambo” in the 1987 Shekhar Gupta blockbuster film “Mr India”. His frequent lines in the film “Mugambo khush hua” was such a superhit line that it is still remembered by people.
then it has become one of the most recognized lines in Hindi cinema. His portrayal of the role of “Mola Ram” in the Hollywood film “Indiana Jones and the Temple of Doom” of Steven Spielberg is also one of his popular roles.
Such is the aura of Amrish Puri that other than the role of “Mogambo” he is equally praised for his role as Baldev Singh, the father of Simran in the film “Dilwale dulhaniya le jayenge”. His other positive roles in the films include “Vijeta”, “Ghatak”, “Chori chori chupke chupke”, “Mujhe kuch kehna he”, “jhooth bole kauwa kate” among others.
He appeared in his first film “Prem pujari” in 1971 and later in “Reshma aur shera”. He later appeared in the film “Kaadu”, “Kalapani”, “Chan pardesi”, “Sat sri akal”, “Shaheed Uddhan Singh”, “Jagadeka veerudu athiloka sundari”, “Major chandrakanth”, “Dalapathi”, “Gandhi”, “Damini” etc.
His last film included “Kisna: the warrior Poet" and “Kachchi Sadak” which were released after his death