Jatin Bora was born on 25th April, 1970 in Kacholukhowa village to Sri Gakul Chandra Bora and 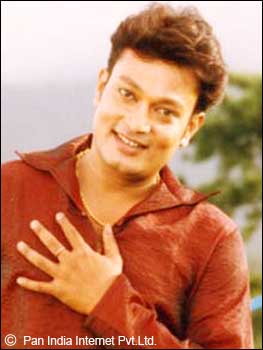 Premolata Barua. He did his primary schooling in Marikalang Prathamik Vidyalaya and schooling from Dawson Higher Secondary. He started his college education from the Nagaon GNDG Commerce College and went on to complete his graduation from Nagaon College. Jatin Bora also is a diploma holder in Fine Arts from the famous Kallol Art School in Nagaon. He has a Visharad degree in Tabla and is also trained in Assamese classical Sattriya dance under the guidance of Rabin Chandra Das of Nagaon. During his childhood, Jatin Bora used to take part in Navajyoti Sangha Maina Parijat, a weekly children’s cultural meet near his village. He was also taught the nuances of Bhaona as a child. Jatin Bora’s first stage performance was in Lakshminath Bezboruah’s ‘Mukti’ when he was a student of class seven.

Jatin Bora married Navanita Sharma on 25th October 2002 who is an accomplished singer and actress. The couple has a son and a daughter.

Jatin Bora has a minor role in ‘Kolahal’ which was his first professional film. This film was directed by Dr. Bhabendra Nath Saikia in 1988. However, his first official debut was in the movie Uttarkaal. This movie boosted his career in the Assamese film industry and he went on to become a star/ after

this film, Jatin Bora acted in a number of plays for Doordarshan. He also featured in many popular serials like Biju Phukan’s ‘Deuta’, Chandra Talukdar’s ‘Namgharia’, Jones Mahalia’s ‘Pratighat’, ‘Birina Paator Angutee’, ‘Surangor Majere’, ‘Ghat-Pratighat’ among others. In the year 2003, Jatin Bora bagged the role in the popular film ‘I Killed Him Sir’ and from then on it was no looking back for this actor. Jatin Bora’s success ladder continued to rise up and he achieved success again from Munin Barua’s mega blockbuster film ‘Hiya Diya Niya’ which became a cult film and broke all records. This film also boosted the Assamese film industry hopes and paved a step ahead for the struggling Assamese film industry. Jatin Bora also appeared in movies like Kanyadaan with veteran Mridula Baruah and Chetana Das. He also gave commendable performances in ‘Nayak’, ‘Daag’, ‘Suren Suror Putek’, ‘and Kadambari among others.

Jatin Bora started his directorial venture in the year 2006 with a film called ‘Adhinayak’. This film was extensively shot in Cherrapunji, Barapani and in and around Guwahati.

Jatin Bora has bagged a number of prestigious awards during his career. He bagged the Jyotirupa Joint Media Award for Excellence in Film, Television and Music for films like Hiya Diya Niya, Nayak, Bidhata, and Maa Tumi Ananya. He also received the Natasurya Phani Sarma Award by the Assam Government for the film Juwe Pura Xun, the NE TV people’s choice award for ‘Kadambari and ‘Maa Tumi Ananya’. Jatin Bora went on receive the Prag Cine Award for ‘Kadambari’ and the Moon light Media Award for Hiya Diya Niya, Nayak, Kanyadaan and Bidhata.