India had been under British control for over 100 of hundreds of years. Our countrymen faced severe oppression from the Britishers. It is due to the great freedom fighters of India, who sacrificed their lives for the independence of the country, that we are living in a free world today.
Hundreds and thousands of men and women fought till their last breath that freedom was achieved finally. The Indian land has given birth to dynamic freedom fighters who made it possible that Indians live in a free country today.
They have made India proud by their heroic deeds and have inspired a whole generation of Indians. Their bravery and courage still remain a matter of pride and continue to inspire Indians. India online gives a detailed account of the lives of freedom fighters of India
Explore the profiles of Indian freedom fighters in alphabetical orders in detail. 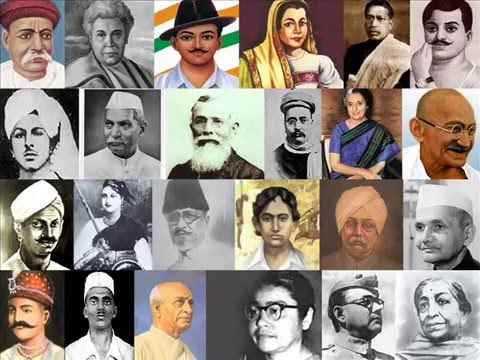 Ashfaqulla Khan: He was born on 22nd October 1900 in a historical city of Uttar Pradesh. Known as Shahjahanpur. He was a freedom fighter in the Indian independence movement. He was a noted Urdu poet and used to write poetry with the pen name of ‘Hasrat’. Read More
Bal Gangadhar Tilak:  Tilak was an Indian nationalist and a popular leader of the Indian independence movement. He was also a teacher and a social reformer of his time. Read More

Chakravarti Rajagopalachari: C.Rajagopalachari, who was informally called Rajaji or C.R., was an Indian independence activist, lawyer, politician and statesman. He was the last Governor General of India. Read More

Gopal Krishna Gokhale: Gokhale was a senior leader of the Indian National Congress and one of the pioneering leaders in the Indian Independence Movement. He founded the Servants of India Society to specifically further the cause of expansion of Indian education. Read More

Gopinath Bordoloi: The first Chief Minister of Assam, Gopinath Bordoloi was an eminent freedom fighter both at the national and state level. He is known as “Lokpriya” which means to be loved by all. Read More

Jawaharlal Nehru: He an Indian lawyer, politician and the first Prime Minister of independent India. He was one of the principal leaders of the Indian independence movement and was often referred to with the epithet of ‘Panditji’. Read More

Jayprakash Narayan: He was also known as JP, JP Narayan, Jayprakash or Loknayak. His most important contribution was for leading the opposition to Indira Gandhi in the 1970s and his call for total revolution. Read More

Kanaklata Baruah: He was an eminent freedom fighter of Assam. She played a pivotal role in 1942 Quit India Movement by sacrificing her life for the cause of the country. The state of Assam saw the symbol of strength in the form of Kanaklata Baruah. Read More

Mohandas Karamchand Gandhi: Mahatma Gandhi as he is popularly known was a pioneering leader of the Indian Nationalism in British ruled India. Gandhi led the principle of non violence and also inspired movements for civil rights, freedom and non violence across the globe. Read More
Maniram Dewan: He was one of the first people to establish tea gardens in Assam. He was a statesman of the Sepoy revolution of 1857. He is considered one of the most outstanding personalities of the 19th century in Assam. Read More
Motilal Nehru: He was a lawyer and an activist of the Indian National Movement. He was also an leader of the Indian National Congress. He was also the founder patriarch of India’s most powerful political family, the Nehru-Gandhi family. Read More

Pushpa Lata Das: She was a veteran freedom fighter, a former parliamentarian and an eminent social worker from Assam. She worked with Mridula Sarabhai and Vijay Laxmi Pandit for development and constructive works. Read More
Rani Gaidinliu: She was a freedom fighter and a political, social and cultural awakener from the state of Nagaland. She was one of the active participants in the fight for freedom from British rule in India. She is recognized as the first female freedom fighter from Manipur. Read More

Rani Lakshmibai: Rani Lakshmibai was one of the greatest warriors of the freedom struggle of India. She was the embodiment of bravery, patriotism, self respect, heroism, perseverance, and resistance to British rule.
She made the most notable contribution to the freedom struggle of the country by fighting till her last breath for the welfare of women in the country and the cause of India’s independence. She was an inspiration of the successive women freedom fighters.

Sarojini Naidu: She was an Indian independence artist and a poet. She was the second Indian woman to become the president of the Indian National Congress and the first woman to become the Governor of the state of Uttar Pradesh. Sarojini Naidu was famously known as the ‘Nightingale of India’ (Bharatiya Kokila). Read More
Shivaram Rajguru: He was an Indian revolutionary who fought for Indian independence. He is well remembered as one of the accomplices of Bhagat Singh and Sukhdev Thapar who sacrificed their lives for freedom of India. Read More

Subhash Chandra Bose:  He was an Indian revolutionary and a freedom fighter. He led the Indian national force against the British colonial people during the World War II. He played an active role in the Indian independence movement. Read More
Sukhdev: Sukhdev Thapar was a freedom fighter. He is one of the great Indian revolutionaries who sacrificed their lives for the freedom of India. . He was an accomplice of Bhagat Singh and Shivaram Rajguru and was involved in the assassination of deputy superintendent of police, J P. Saunders. Read More