Ashfaqulla Khan  (1900 -1927) was a freedom fighter in the Indian independence movement. He was a noted Urdu poet and used to write poetry with the pen name of ‘Hasrat’. 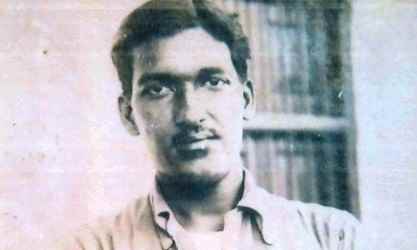 Ashfaqulla Khan was born on 22nd October 1900 in , a historical city of Uttar Pradesh. Known as Shahjahanpur. He was born to Shafiq Ullah Khan and Mazhoor-Un-Nishan Begum.
Native of Shahjanpur in Uttar Pradesh, Ashfaqulla Khan was born in a devout Muslim family. He was highly inspired by Pandit Ram Prasad Bismil. Though not an ardent advocate of violence he wanted to instill fear in the minds of Bristishers and their agents.
As a member of Hindustan Republican Association, he alongwith Ram Prasad Bismil looted train at Kakori but was later arrested and send to gallows, only to inspire generations to come.
Today one can find various institutions named after this great personality who lived and died for the cause of the nation and alongside Ram Prasad Bismil served an epitome of communal brotherhood.
His elder brother Riyasat Ullah Khan was the classmate of Ram Prasad Bismil. When Bismil was declared absconder after the Manipuri conspiracy, Riyasat used to tell Ashfaqulla about the bravery and Urdu poetry of Bismil.
This led to a keen interest in Ashfaqulla to meet Bismil because of his poetic attitude. In the year 1920, when Ram Prasad Bismil came to Shahjahanpur, Ashfaqulla tried to meet him but failed.
the year 1922 when the non corporation movement started, Bismil organized meetings in Shahjahanpur to tell the people about the movements. It was then Ashfaqulla met Bismil and introduced himself as brother of his friend. From then on, they became good friends and the poetic alignment between them made them popular.

When Mahatma Gandhi withdrew the non corporation movement after the Chauri Chaura incident in 1922, many Indian youths felt dejected and among them Ashfaqulla was one. He felt that India should become free as soon as possible and so he decided to join the revolutionaries and win the friendship with Bismil.

Asfaqullah khan and Ramprasad Bismil together formed Hindustan Republican Association. The founder of the Association was Shachindra Nath Sanyal. The objective of the associatiom was to make India free from the clutches of the British.

Later when the British disregarded their plea for independence, the revolutionaries decided to make them hear through their actions, subsequently, they organized a meeting on 8th August 1925 in Shahjahanpur and it was decided to loot the government treasury carried in the 8 Down Saharanpur-Lucknow passenger train.

On 9th August 1925, Ashfaqulla Khan and eight other revolutionaries looted the train under the leadership of Ram Prasad Bismil. After the act, the British Government was astonished and deployed the Scotland Yard police to investigate the case.

Within a month, the C.I.D collected the clues and decided to arrest the revolutionaries. On the morning of 26th September 1925, Ram Prasad Bismil and others from Shahjahanpur were arrested but Ashfaqulla went into hiding and moved to Banaras wherefrom he went to Bihar and worked in an engineering company for ten months.

Later he went to Delhi to find out ways to move out of the country and took the help of one of his Pathan friend who betrayed him by informing to the police and Ashfaqulla was subsequently arrested. Tasadduk Husain, the then superintendent of police tried to play communal politics between Bismil and Ashfaqulla Khan but failed.

Ashfaqulla Khan was detained in Faridabad jail and a case was registered against him. The case of Kakori conspiracy was concluded by awarding death sentence to four people including Ashfaqulla Khan and Ram Prasad Bismil.

On 19th December 1927, Ashfaqulla Khan was hanged and before hanging he kissed the hanging rope and recited the ‘Shahada’ in Urdu. Both Ram Prasad Bismil and Ashfaqulla Khan were hanged on the same day but in different jails.