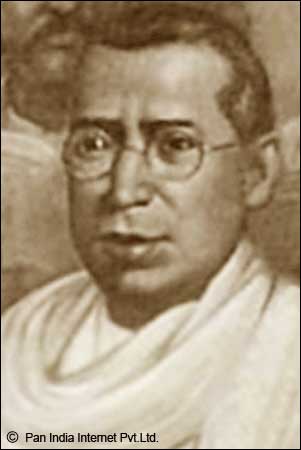 He was born in a wealthy Hindu Vaishnavite family. His father, Ramchandra Pal was a Persian scholar and a small landowner.

Bipin Chandra Pal is known as the ‘Father of Revolutionary Thoughts’ in India. He was also an eminent radical of his time.

He married a widow for which he had to sever all ties with his family.

In the later years, he was working ad a librarian in Calcutta public library where he met many political leaders like Shivnath Shastri, S.N. Banerjee and B.K. Goswami.

He also went to England in 1898 to study comparative ideology. However in a span of one year he came back to India and since then he started preaching the idea of Swaraj among the local Indians. He also wrote a number of articles and write ups for imparting social awareness and nationalism among the people.

Bipin Chandra Pal used his profession of journalism in spreading patriotic awareness. He published a number of journals, weekly and books to spread Swaraj. His prominent books include ‘Nationality and Empire’, ‘Indian nationalism’ , ‘Swaraj and the Present Situation’, ‘The Soul of India’, ‘The Basis of Social Reform’ , ‘The Hinduism’ and ‘The New Spirit’.

He was also the editor of the ‘Democrat’, the ‘Independent’ and many other journals. He also started journals like ‘Paridarsak’, ‘New India’, ‘Bande Mataram’ and ‘Swaraj’.

He also regularly contributed to the Modern Review, the Amrita Bazaar Patrika and the Statesman. He was called as the ‘mightiest prophet of nationalism’ by Shri Aurobindo.

Bipin Chandra Pal was famous as one of the triumvirate of the three militant patriots popularly known as ‘Lal-Bal-Pal’. These three was responsible for initiating the first popular upsurge against the British colonial policy in the 1905 partition of Bengal.

He was also the founder of the journal ‘Bande Mataram’. At the time of Bal Gangadhar Tilak’s arrest and government repression in 1907. He left for England where he was briefly associated with the radical India House and also founded the Swaraj journal.

However, during that time the political repercussions in the wake of Curzon Wyllie’s assassination in 1909 led to the collapse of the publication and as a result it drove Pal to penury and mental collapse in London.

He was among the first to criticize Mahatma Gandhi or the ‘Gandhi cult’ as it sought to replace the present government by no government or by the priestly autocracy of the Mahatma.

Bipin Chandra Pal history is the history of pre-independent India when the youth of the day were struggling to throw away the yoke of British rule.

Contrary to moderate he along with Lokmanya Tilak, Lala Lajpat Rai advocated the Swadeshi movement involving the boycott of all imported items and the use of Indian-made goods.

The trio Lal-Bal-Pal has advocated radical means like burning Western clothes made in the mills of Manchester or Swadeshi, boycotting British manufactured goods and strikes and lockouts of British owned businesses and industries to get their message across to the British.

He was was imprisoned for six months on the grounds of his refusal to give evidence against Sri Aurobindo in the Vande Mataram case.

He made a strong plea for repelling of Arms Act in the year 1887 as it was discriminatory in nature. He was also effectively involved in removing social evils from the nation and in arousing the feelings of nationalism through national criticism.

During the last years of his life, Bipin Chandra Pal secluded himself from the Congress and led a lonely life. He died on 20th May 1932.

Even after the death Bipin Chandra Pal biography continue to inspire the youth of the country and will ever keep them reminding about the great sacrifices he made for the nation.