Chandra Shekhar Azad who is popularly known as Azad was one of the Indian revolutionaries of India. He is considered to be the mentor of Indian revolutionary Bhagat Singh and the chief strategist of the Hindustan Socialist Republican Association (HSRA). 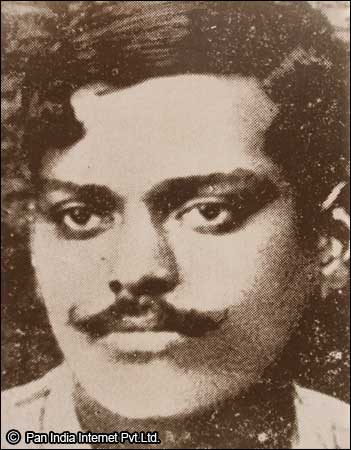 Chandra Shekhar Azad was born on 23rd July 1906 in Saryuparin Brahmins family of Pandit Sitaram Tiwari and Jagrani Devi. He was born in Badarka village of Unnao district in Uttar Pradesh. Chandra Shekhar Azad spent his childhood in the Bhabra village when his father was serving in the former estate of Alirajpur. He also learned archery from the tribal Bhils of erstwhile Jhabua district which helped him later on during the arms struggle against the Britishers.

Chandra Shekhar’s mother wanted to make her son a great Sanskrit scholar and so she persuaded his father to send him to Kashi Vidyapeeth in Banaras for studying Sanskrit. On December 1921, when Mahatma Gandhi launched the non cooperation movement, Chandra Shekhar, was then a 15 year old student who joined that movement. As a result, he was arrested presented before a magistrate. When the magistrate asked him his name he replied ‘Azad’ and from then on he assumed the title of ‘Azad’ and came to be known as Chandra Shekhar Azad. The magistrate at that time sentenced him to imprisonment for fifteen days with hard punishments.

After the non cooperation movement was suspended by Mahatma Gandhi in the year 1922, Chandra Shekhar Azad became more aggressive on his part. He then committed himself to achieve complete independence by any means. He also believed in India’s future by socialism. During that time he met a young revolutionary named Pranvesh Chatterji who introduced him to Ram Prasad Bismil who had formed a revolutionary organization called the Hindustan Republican Association (HRA). Chandra Shekhar Azad was impressed with the idea of the HRA of creating an independent India with equal rights and opportunity to everyone without discrimination of caste, creed, religion or social status.

On the introduction of Azad to Bismil, he was impressed by Azad’s zest and subsequently Azad became an active member of the organization and started collecting funds for it. Most of the funds collected were through robberies of the government property. Azad also wanted to build a new India based on socialist principles. He and his compatriots also planned and executed several acts of violence against the British. Most of the revolutionary activities were executed from Shahjahanpur which was also the hometown of Ram Prasad Bismil. Chandra Shekhar Azad was also involved in revolutionary activities like the famous Kakori train robbery of 1925, the attempt to blow up the Viceroy’s train in 1926 and the shooting of J P. Saunders in Lahore in 1928 to avenge the killing of Lala Lajpat Rai. Chandra Shekhar Azad made Jhansi his organization’s hub for a considerable time period. He chose the forest of Orchha situated around fifteen kms from Jhansi his shooting practice ground. He was an expert marksman and also trained other group members. Azad lived under the alias of Pandit Harishankar Brahmachari for a long period and started teaching kids of the nearby village of Dhimarpura. In that way, he managed to establish good rapport with the local residents. The Dhimarpura village was later renamed as Azadpura by the Madhya Pradesh government. During his time in Jhansi, Vishwanath Vaishampayan, Sadashivrao and Bhagwan Das Mahaur came in contact with him and became an integral part of his revolutionary group along with the then Congress leaders Pandit Raghunath Vinayak Dhulekar and Pandit Sitaram Bhaskar Bhagwat.

In the year 1924, the HRA was formed by,Yogesh Chandra Chatterji, Ram Prasad Bismil Shachindra Nath Bakshi and Sachindra Nath Sanyal just after two years of the non cooperation movement. After the Kakori train robbery in the year 1925, the British clamped down on revolutionary activities. Ashfaqulla Khan, Ram Prasad Bismil, Rajendra Nath Lahiri and Thakur Roshan Singh were given death sentence for their participation in the activities. Chandra Shekhar Azad, Keshab Chakravarthy and Murari Sharma however avoided the capture. Chandra Shekhar later reorganized the HRA with the help of revolutionaries like Sheo Verma and Mahaveer Singh. Azad was also a close partner of Bhagwati Charan Vohra who along with Bhagat Singh, Sukhdev and Rajguru helped him to change the HRA into the Hindustan Socialist Republican Association (HSRA) in the year 1928 in order to achieve the primary goal of an independent India based on socialist principles.

In the last week of February in the year 1931, Chandra Shekhar Azad went to Sitapur jail and met Ganesh Shankar Vidyarthi with the hope that Vidyarthi would involve in the case of Bhagat Singh and others as he had previously done in the Kakori conspiracy case. However, Vidyarthi suggested him to go to Allahabad and meet Pandit Jawaharlal Nehru and stated that if Nehru could be convinced, he would persuade Mahatma Gandhi to talk to the Viceroy Lord Irwin and settle an agreement with the British Government in the forthcoming Gandhi-Irwin pact. Chandra Shekhar Azad then met Jawaharlal Nehru on 27th February 1931. Jawaharlal Nehru though did not agree with him on some points, was moved by Azad’s patriotism and gave him money which was required for his work.

On the same day, Chandra Shekhar Azad went to Alfred Park and was discussing confidential matters with fellow party member Sukhdev Raj when Deputy Superintendent of police Bisheshwar Singh along with S.S.P. John Nott-Bower arrived there. This resulted in gunfight by Azad and the police where Azad shot both the SSO and the DSP. However, the police surrounded the park and Azad was hit on his right thigh making it difficult for him to escape. He however, made it possible for Sukhdev Raj to escape by providing him cover fire. He managed to keep the police at bay for a long time until finally he has only one bullet in his pistol and was surrounded by police. As he found himself outnumbered he shot himself keeping his pledge of never being captured alive. However, the police officers who came after his death did not approach his dead body for about half an hour. The police approached his dead body only after a gun filled with buckshot was fired in his thigh and no movement was noticed, they went forward to touch him.

The Colt pistol of him which he had during his death is displayed in the Azad Museum in Allahabad. Chandra Shekhar Azad has been portrayed in many films. In the 1956 Manoj Kumar’s film ‘Shaheed’, every commemoration of the life of Bhagat Singh featured the character of Azad. He was also portrayed by Sunny Deol in the movie ‘23rd March 1931: Shaheed’ and by Akhilendra Mishra in the film ‘The Legend of Bhagat Singh’ starring Ajay Devgan. The lived of Chandra Shekhar Azad, Bhagat Singh, Sukhdev, Rajguru and other revolutionary characters were also depicted in the 2006 film ‘Rang De Basanti’ with Aamir Khan portraying the character of Azad. This film draws parallels between the lives of young revolutionaries with today’s youth.