Gopinath Bordoloi was the first Chief Minister of Assam. He was an eminent freedom fighter both at the national and state level. He is the prime architect of modern polity of Assam.
He was the first and the only person from the Northeastern region to be the awarded the Bharat Ratna, the highest civilian award of the country. He is known as “Lokpriya” which means to be loved by all. 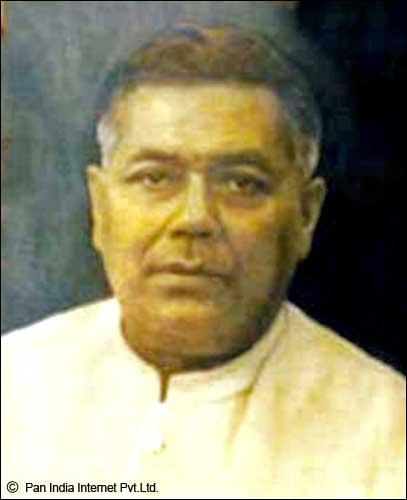 Gopinath Bordoloi was born on June 6, 1890 at Raha in Assam. He was born to Buddheswar Bordoloi and Praneswari Bordoloi. At the early age of 12 he lost his mother.

He did his graduation from Scottish Church College in Calcutta in 1911. Lokapriya passed MA from Calcutta University in 1914.

Returning from Calcutta he worked as a headmaster of Sonaram High school. After passing the law examination he practiced in Guwahati.

Gopinath Bordoloi was a follower of the Gandhian principle of non violence. Due to Bordoloi’s unselfish dedication towards Assam the then Governor of Assam Jayram Das Doulatram conferred him with the title “Lokpriya” which means to be loved by all.

He did not rise much as a freedom fighter, but his dedication to the national freedom movement was showed during the time period between 1946-1947.

This was the time when a majority of the muslim political leaders from Bengal most of them under the mislim league, wanted to include the Hindu dominated Assam into East Pakistan.

Gopinath Bordoloi was an eminent politician. He is the prime architect of modern polity of Assam. In 1936 the Congress decided to participate in the regional Assembly elections. They won but decided to remain as the opposition. After Md Sadulla resigned in 1938 the Governor invited Gopinath Bordoloi to form the government.

They took oath on September 21. The new government did not last long and his government resigned in 1940. After the new constitution was formed the Congress formed the government and Gopinath Bordoloi was made the chief minister.

He was the first Congress Chief Minister of undivided Assam. He played an important role in opening up the North east for the Congress.

Repartitions were made by public leaders, including Bordoloi to wind up the Assam Association in 1921. The Assam Provincial Committee was established in 1921 and Bordoloi was elected as the secretary.

Under Bordoloi’s courageous and competent leadership the entire people of Assam could save themselves from the Cabinet mission’s plan. Bordoloi saved the entire Northeast from the sinister design of “Crown colony”.

He also made a significant contribution in securing the future of Assam from being part of the East Pakistan. The Muslim leaders from Bengal desired the inclusion of Hindu dominated Assam into East Pakistan.

He also worked closely with Sardar Vallabhai Patel to secure sovereignty of Assam against China and East Pakistan.

He succeeded in uniting all the sections of the society. Gopinath Bordoloi’s was the first government among all the provincial governments in India which dared to levy agricultural income tax on rich and powerful planters and help usher in ‘swaraj’ in place of ‘planter’s raj’.

Bordoloi as a Writer

Award and Recognitions of Bordoloi

Biography of Gopinath Bordoloi will remain incomplete without the mention of various honors and awards bestowed upon him. Gopinath Bordoloi was the first and the only person from the Northeastern region to be the awarded the Bharat Ratna, the highest civilian award of the country.

He was posthumously awarded the Bharat Ratna. The award came half a century after his demise in 1950.