Rani Gaidinliu was a freedom fighter and a political, social and cultural awakener from the state of Manipur.  She was one of the active participants in the fight for freedom from British rule in India. She is recognized as the first female freedom fighter from Manipur. 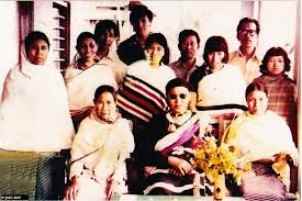 Rani Gaidinliu was born on 26th January 1915 in Longkao village of Manipur. She was born to Lothonang Pamei and Kachaklenliu and was the fifth child among her six sisters and a brother. The year she was born, Manipur like the rest of the country was the victim of the British colonial rule.
In 1927, at the age of 13, she became restive and her mind was tormented as she saw the prevailing social and political condition in the western hills of Manipur under the British regime.
During that time, she met prominent local leader Haipou Jadonang at Puilon village. Persuaded by his ideologies and principles, Rani Gaidinliu launched the revolutionary movement against the British in the same year.

The revolutionary movement of the western hills of Manipur was popularly known by historians as Naga Raj movement and it received a huge momentum when 100 guns were brought from Cachar in Assam and propagation was made to boycott British taxation and forced labor.
In the year 1931, while returning with Gaidinliu from ‘Bhubon Cave’ in Cachar, Haipou Jadonang was captured by the British. He was hanged and Gaidinliu took over the leadership and challenged the British.
When the British rule tried to suppress her movement, she went underground along with her followers. Thereafter a fierce gun battle took place in Hangrum village in the North Cachar hills with the British army and the big village was set ablaze by the colonial rulers.

After much pursuit, Rani Gaidinliu was captured on 17th October, 1932 in Poliwa Village and sentenced her to life imprisonment for waging war against the British crown. During that time, she was only 16 years old.
Pandit Jawaharlal Nehru met her in Shillong Jail in the year 1937 and described her as the ‘daughter of the hills’ and subsequently gave her the title of ‘Rani Gaidinliu’ or the ‘Queen of her people’.
After India’s independence in 1947, Rani Gaidinliu was released from Tura Jail on the orders of then Prime Minister Jawaharlal Nehru. Till then, she served 14 years of prison term in various jails in Guwahati, Aizawl, Tura and Shillong among others.
She was however, not allowed to return home to her native village and she stayed in Vimrap village of Tuensang with her younger brother till 1952. She organized a resistance movement against the Naga National Council led insurgents in the year 1966 and had to go underground again.
Thereafter on the request of the Central Government and State Governments of Nagaland and Manipur, she came over ground and stayed in Kohima from 1966 to 1992. She also met Smt. Indira Gandhi in New Delhi to put forward her demand for a separate Zeliangrong Administrative Unit.
She also raised a demand for the recognition of Zeliangrong tribe in the three states of Assam, Manipur and Nagaland. The Zeliangrong People’s Convention (ZPC) was formed in 1980 at Tamenglong, Manipur and Rani Gaidinliu was unanimously elected as the president of the organization.
The organization then took up their objective of recognition of the tribe to the ministers of the state. Rani Gaidinliu returned to Longkao in 1991 and died one 17th February 1993 at the age of 78.


Awards and Recognitions of Rani Gaidinliu:

Rani Gaidinliu was awarded the prestigious Padma Bhushan award by the Indian Government in the year 1981 for her social work. She was also conferred the ‘Tamrapatra Freedom Fighter Award’ in 1972 and Vivekananda Seva Award in 1983. The Government also issued a postal stamp in her memory.
She was also conferred the ‘Birsa Munda Award’ posthumously. The Government of India instituted an award called Shree Shakti Puraskar in honor of five eminent women in the Indian history of whom Rani Gaidinliu was one of them.
15769