Rani Lakshmibai was one of the greatest warriors of the freedom struggle of India. She was the embodiment of bravery, patriotism, self respect, heroism, perseverance, and resistance to British rule.
She made the most notable contribution to the freedom struggle of the country by fighting till her last breath for the welfare of women in the country and the cause of India’s independence. 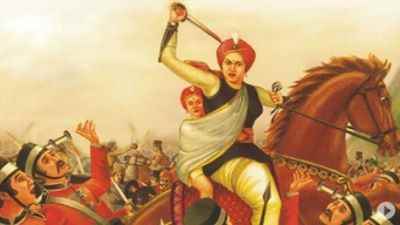 Lakshmibai was born on November 19, 1835, at Varanasi. She was born to Monopant Tambe and Bhagirathi bai Tambe. The family belonged to Maharashtra and was a wealthy high class Brahmin family. She was originally named Manikarnika and was later nicknamed Manu.
Her mother passed away when she was 4 years old. Her father was employed under court of  Peshwa Baji Rao of Bithoor district. She was brought up by the Peshwa  like his own daughter.
Lakshmibai was given education at her home. Unlike the other girls Lakshmibai was independent. She learnt archery, horsemanship and self defence. Her mentor was Tatya Tope.

She was married to the Maharaja of Jhansi Raja Gangadhar Rao in 1842. She came to be known as Lakshmibai after her marriage. She gave birth to a son who died at the age of 4 months. Later they adopted Damodar Rao. The raja unable to bear the grief of the son died in 1853.
The maharaja died when she was only 18 years old. Despite her tragedies she took over all her responsibilities. After the death of her husband Lord Dalhousie planned to annex Jhansi as according to them Jhansi did not have a legal heir, Damodar being the adopted son of the Rani. The British offered the Rani a pension of 60,000 and asked her to leave the fort which the latter would never oblige to.

Lakshmi Bai had a firm resolution not to give Jhansi to the East India Company. The Indian rebellion started at Meerut on May10, 1857. The news of the bullet casings coated with pork and beef spread throughout India. During this time Lakshmibai was ruling Jhansi and began leading her troops to subdue the battle initiated by other princes.

She assured her subjects that there was no threat to the city from outside forces. Lakshmibai called for an armed force. She was supported in this by Gulam Gaus Khan, Dost Khan, Khuda Baksh, and Kashi Bai among others.
She was determined not to surrender in the hands of the British. She fought with the British forces when on March 23, 1858 the Sir Hugh Rose besieged Jhansi. An army of more than 20,000 headed by Tatya Tope was sent to relieve Jhansi but they failed when they fought with the British.
Hugh Rose and an Indian general betrayed Rani Lakshmibai. Three days later the city was captured by the besiegers. Lakshmibai escaped under the cover of darkness with her son. With Damodar  Rao she decamped to Kalpi with her troops.
There she joined the additional rebel forces including Tatya Tope. They then moved to Gwalior where she grouped rebel forces and they defeated the maharaja of Gwalior.  On the second day of fighting  on June 18, 1858  she was seriously wounded  and died. However British were unable to find the body of lakshimi bai. It is believed that a quick and secret funeral was conducted.