Shivaram Hari Rajguru was an Indian revolutionary who fought for Indian independence. He is well remembered as one of the accomplices of Bhagat Singh and Sukhdev Thapar who sacrificed their lives for freedom of India.

Shivaram Hari Rajguru was a Maharastrian and belonged to the Deshastha Brahmin community. He was born in a place named Khed near Pune in the year 1906 which was later renamed as Rajgurunagar in his honor.
At a very young age he came to Varanasi where he learnt Hindu religious scriptures as well as Sanskrit. He had a very sharp memory and he learnt by heart the Laghu Siddhant Kaumudi. He also greatly admired Shivaji and his guerrilla tactics. 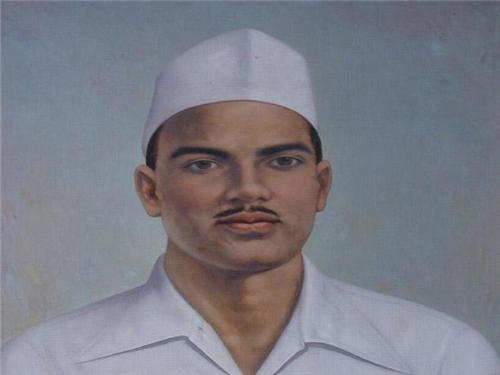 While Rajguru was in Varanasi he came in touch with various revolutionaries. He joined the Hindustan Socialist Republican Army (H.S.R.A) and became one of the prominent members of the party. He had a pseudonym Raghunath and he was known by this name in the party.
Rajguru was very courageous and at the same time he was very fearless. He only worshiped and adord his Motherland. He was a close associate of Shaheed Bhagat, Singh, Chandra Shekhar Azad, and Jatin Das and his field of activity was Punjab and U.P with Agra, Lahore and Kanpur as his headquarters.
Rajguru had a brilliant skill in shooting and therefore he was regarded as the gunman of the party. He took part in various activities of the revolutionary movement, the most important being Saunders murder.

Rajguru is better known as Bhagat Singh’s colleague in the murder of the British police officer J P. Saunders. This murder was carried out as avenge of the death of the veteran freedom fighter Lala Lajpat Rai

In the year 1928, the British government created a commission under Sir John Simon to report on the political situation in India of that time. The Indian political parties boycotted the commission as it did not have any Indian in its membership.
The Commission thereby met with nationwide protests. When the commission visited Lahore on 30th October, 1928, a non violent protest against the commission was led by Lala Lajpat Rai in a silent march, but the police responded violently.
James A. Scott, The superintendent of police, ordered the police to lathi charge the protesters and specially assault Lajpat Rai, who was grievously injured.

When Lala Lajpat Rai died on 17th November, 1928, it was widely assumed that Scott’s blows led to his death. However, when this matter was put forward in the Parliament of the British, they completely denied the government’s role in Rai’s death.

After that, Shivram Rajguru with Bhagat singh avowed to take revenge and he and other revolutionaries like Sukhdev Thapar, Jai Gopal and Chandrasekhar Azad planned to kill Scott. Jai Gopal was supposed to identify Scott and had to give signal to Singh to shoot Scott.
However, in a case of mistaken identity, Jai Gopal signaled Bhagat Singh on the appearance of John.P. Saunders who was an assistant commissioner of police. Saunders was shot by Shivram Rajguru and Bhagat Singh while leaving the district police headquarters in Lahore in the evening on 17th December 1928.
Head constable Chanan Singh was also killed when he came to Saunder’s aid. After killing John P. Saunders, fled to places of safety.

The police launched a massive operation to find out the culprits and kept a block on all possible exits and entrances. Rajguru along with the other revolutionaries and  hid for next two days. On 19th December, 1928, Sukhdev called on Durga Devi Vohra, wife of Bhagwati Charan Vohra for help which she agrees.
They decided to catch a train from Lahore to Howrah. To avoid recognition, Bhagat Singh cut his hair short and shaved off his beard. In the early morning next day, dressed in Western attire, Bhagat Singh passed of a young couple with Vohra's child on his shoulder.
Rajguru disguised as their servant carrying their luggage. They managed to escape to Cawnpore. On reaching there, they boarded a train to Lahore. In Lucknow, Rajguru left separately for Benares while Bhagat Singh and Vohra with the child left for Howrah.

Rajguru along with Bhagat Singh and Sukhdev were found guilty of killing Saunders were subsequently hanged on 23rd March 1931.
The authorities of the jail then broke the rear wall of the jail and secretly cremated the three martyrs under the cover of darkness outside Ganda Singh Wala village and then threw their ashes into the Sutlej River.

The famous writer Anil Verma, a judge wrote a book on Rajguru titled ‘Ajeya Krantikari Rajguru’ which was published by the Indian Government and released on 24th August 2008 on the birth centenary of Shivaram Rajguru.
39657