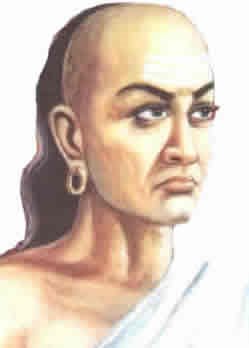 A teacher, philosopher and royal advisor, Chanakya was the main architect of the establishment of the Maurya Empire and the rise of the first Maurya emperor Chandragupta’s rise to power.
Traditionally identified as Kautilya or Vishnu Gupta, Chanakya is the author of the ancient Indian political treatise called “Arthasastra”.
He is the only personality who has been accepted and revered as a genius both by Indian and Western scholar.
Chanakya is a historical milestone in the making of India. Although he lived around the third century BC his ideas and principles show concurrence and validity in the present day world.

Chanakya was born on c.350 BCE. His birthplace is shrouded in mystery. There are several theories about his origin. According to one theory he was born in Patliputra. According to the Buddhsit text “Mahavamsa Tika” he was born at Taxila. Jain scriptures like “Adbidhana Chintamani” say that he was born in South India.
While some other Jain accounts mention his birthplace as Canaka village. At a very early age he started learning the Vedas. During his infancy he completely memorized the Vedas. He had very keen interest in politics since his childhood. Chanakya studied at Takshshila, an ancient centre of learning.
He later became a teacher at Takshashila.  His life was connected to two cities Takshashila and Patliputra. The cause of the death of Chanakya is not known. But according to a legend Subandhu did not like Chanakya.
He told Bindusara, son of Chandragupta, that Chanakya was responsible for the death of his mother. Bindusara was horrified and angry at Chanakya. On knowing the anger of the king Chanakya decided to end his life by starving himself to death.
Later when the king came to know that the death of his mother was due to an accident he asked Subandhu to convince Chanakya not to execute the plan of killing himself. Subandhu pretending to conduct a ceremony for Chanakya burnt Chanakya alive. He died at Patliputra on c.275 BCE.

Chanakya is traditionally identified as Kautilya or Vishnu Gupta. He is the author of the ancient Indian political treatise called “Arthasastra”.
He is considered a pioneer in the filed of economics and political science in India. His work is a pioneer to classical economics. The Arthshashtra discusses monetary and fiscal policies, welfare, international relations and war strategies in details.

Neetishashtra is also known as Chanakya neeti. It is a treatise on the ideal way of life. It shows Chanakya’s deep study of Indian way of life. The “Neeti-sutras” was also developed by him. It is an account of how people should behave.
There are 455 well known sutras. Of these sutras 216 refer to “raja-neeti” which refers to the do’s and the don’ts of running a kingdom. These sutras were referred to by Chanakya while grooming Chandragupta and other selected disciples in the art of ruling a kingdom.

The diplomatic enclave in New Delhi is named in honour of Chanakya as Chanakyapuri. Many institutes are named after him including the Training Ship Chanakya, Chanakya national law university and Chanakya institute of Public Leadership.
12534