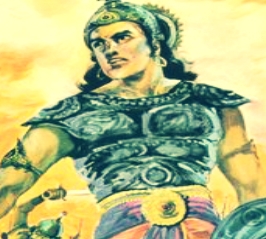 Chandragupta II as an emperor

Chandragupta II was the son of Samudragupta and grandson of Chandragupta I. His mother, Datta Devi was the chief queen of Samudragupta the Great. He was married to Dhruvaswamini. King Vikramaditya ruled from the period c.380-413 till 415 C.E. He was an efficient ruler and under his reign the kingdom flourished.
From the period of 388 to 409, Chandragupta ruled Gujarat, the northern part of Mumbai, Saurashtra, and Malwa. He defeated the Saka kings of Malwa, Gujarat and the Konkan coast thereby extending the Gupta Empire up to the Arabian Sea.
Later he took the title of ‘ Sakari’ meaning the ‘destroyer of the Sakas’. He also brought Bengal and Punjab under his control. Therefore one can establish the fact that Chandragupta rule extended to the Brahmaputra in the east to the river Chenab and the Arabian Sea in the west, the Himalayas in the north to the river Narmada in the south.
He made Ujjain the capital of his kingdom. Like his father, Chandragupta II too issued coins. He added two new types such as the Horseman type and the Lion-Slayer type which were later used by his son, Kumaragupta.

Chandragupta II was a great lover of art and culture. During his rule one can see many distinguished poets and scholars in the court. They were known as the Navaratnas or the Nine Jewels.
Some of the distinguished scholars like Kalidasa, the Shakespeare of India, Amara Sinha, a Sanskrit grammarian lived during his reign.
Another important event to be noted is the one of the great Chinese pilgrims; Fa-hein visited the country during his reign. He left a detailed account of the political, economic, social and religious life of the people during the Gupta period. ChandraguptaII was succeeded by his son, Kumaragupta.
2345