Commonly known as Chhatrapati Shivaji, Shivaji Bhosale was the founder of the Maratha Empire. Shivaji  is known as one of the greatest emperors of India. He was the pioneer of the commando actions in military organizations. He laid the foundation of swaraj or self rule. 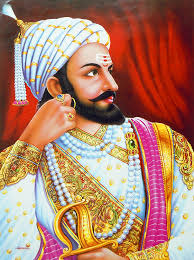 Shivaji Bhosle was born on February 19, 1630 in Shivneri in Pune district, Maharashtra. He was born to Shahaji Bhosle and Jijabai. Shivaji was a devotee of his mother who was extremely religious which had a profound influence on Shivaji himself.
Shivaji was a reader of the Ramayana and the Mahabharata which also had a deep influence on his life. Shivaji was married to Sambhaji. Shivaji died in 1680.

Shivaji created an independent Maratha kingdom. His military was disciplined and well regulated. Shivaji was the pioneer of the commando actions in military organizations. He laid the foundation of swaraj or self rule.
He established a Hindavi Swarajya. He led a resistance to free the Maratha people from the Sultanate of Bijapur and the Mughal Empire. Raigad served as Shivaji’s capital. In 1674 he was crowned as Chhatrapati of the Maratha Empire. Shivaji fought and won many battle.
In the Battle of Purandhar he defeated the army led by Fattekhan. In the battle of Pratapgad the forces of Shivaji defeated the forces of the Bijapur Sultanate. The victory led to the establishment of the Maratha Empire and made Shivaji a hero among the people.
Meanwhile, Mughal emperor Aurangzeb could identify Shivaji as a major threat to the Mughal Empire. In the battle of Kolhapur he defeated the Bijapuri forces. In the Battle of Pavan Khind a truce was made between Shivaji and Adilshah through Shahaji Raje.


Shivaji as an administrator

Shivaji was an able administrator. His administrative organization was well structured. He established an able civil and military administration. The navy built by him was powerful in every sense.
His government included concepts like Cabinet, Foreign Affairs and Internal Intelligence. He also built many forts and renewed the old ones. Shivaji’s rule was progressive.
Shivaji was noted for being benevolent towards his subjects. He abolished the feudal system. He prohibited slavery and applied liberal policy towards the women.
Shivaji was a promoter of the Sanskrit language. Shivaji was a devout Hindu. He, however, respected all religions. He allowed his subjects freedom of religion and opposed forced conversion.

Several works have been made on the life and achievements of Chhatrapati Shivaji. Novels, biographies, plays, poetry and television series have been made on him. The films Raja Shivaji and Me Shivajiraje Bhosale Boltoy etc were made on the life and achievement of Shivaji.
The biographies Shivaji, Shivchatraptiche Charitra, the novel Shivaji Yogi, the book Shivaji and his Times etc were published portraying the life of Shivaji.