Krishnadevaraya was the greatest and the most famous emperor of the Vijayanagara Empire. He took the empire to its zenith and is therefore regarded as an icon by the people of India.
He was given the title Andhra Bhoja, Mooru Rayara Ganda and Kannada Rajya Ramana. He was a great patron of art and literature. His reign is considered the golden age od Telugu literature.

Krishnadevaraya As An Emperor 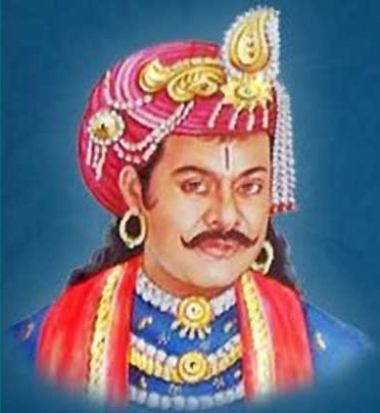 Krishnadevaraya was the son of Tuluva Narasa Nayaka, the founder of the Tuluva Dynasty. Krishnadevaraya’s rule is remembered as a glorious chapter in the history of Vijayanagara Empire. His rule was characterized by expansion and consolidation.
He was an excellent general. He is credited with building some of the finest temples in South India.  Krishnadevaraya was the third ruler of the Tuluva Dynasty. His rule is marked by military success in the history of Vijayanagara. He won many battles. He subdued local rulers, fought and won many wars.
He also fought war with the Kalingas. In one of the wars he defeated the Golkondas and captured its commander and crushed Bijapur and its sultan. In 1520 he secured the fortress of Raichur after a difficult seize. His empire now extended to the whole of south India.
Krishnadevaraya also maintained friendly relations with the Portuguese Dominion of India in Goa in 1510. He obtained guns and horses from Portuguese merchants and used Portuguese expertise in improving the water supply of the city of Vijayanagara.
Krishnadevaraya was an able administrator. He built a suburb near Vijayanagara known as Nagalapura. As an administrator he was liberal towards all the religion. He died in 1529.

Krishnadevaraya had profound interest in art and literature. He was a patron of art and literature. The court of Krishnadevaraya included many Telugu, Sanskrit, Kannada and Tamil poets.
He patronized Kannada poets Mallanarya, Timmanna Kavi, Vyasatirtha etc. His reign is considered the golden age of Telugu literature. Eight poets were part of his court. These eight poets were eight pillars of his literary assembly. The emperor was also fluent in many languages.
23143