Maharaja Ranjit Singh was the first Maharaja of the Sikh empire. He is known as Sher-e-Punjab that is the  lion of Punjab. He is considered one of the three lions of modern India. He is one of the revered heroes in the history of India.
Maharaja Ranjit Singh was a great warrior, a fearless soldier, a secular king, an able administrator and a statesman. He made the golden beautification of the Harmandir Sahib, the Golden Temple with marble and gold. 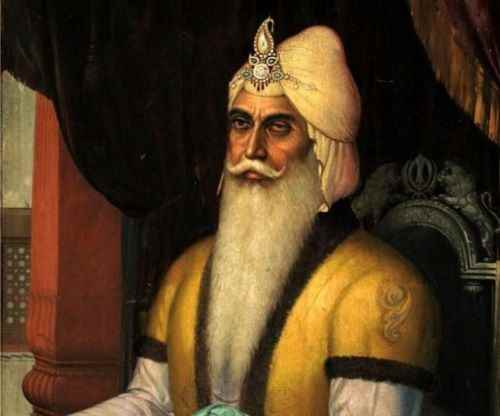 Ranjit Singh was born on November 13, 1780 at Gujranwala in present day Pakistan. His father was Maha Singh and mother was Mai Raj Kaur. Ranjit Singh belonged to a Sikh clan of the Northern India.
He once suffered from small pox that resulted in the loss of his one eye but that never deterred him from being one of the greatest warriors and administrators of India. Ranjit Singh succeeded to the throne after the death of his father. He was crowned on April 12, 1801.
He conquered several territories and created the Sikh empire and became the maharaja of Punjab. Maharaja Ranjit Singh had many queens and children.
The Maharaja died on June 20, 1839. His Samadhi is located in Pakistan. The Indian Postal Department issued a commemorative stamp on Maharaja Ranjit Singh.


Maharaja Ranjit Singh as an emperor

Maharaja Ranjit Singh was a great warrior and a fearless soldier. He was the only Sikh ruler in Punjab who raised the flag of freedom because the whole India was occupied by the East India Company except Punjab. Maharaja Ranjit Singh was crowned on April 12, 1801.
He conquered several territories and created the Sikh empire thus becoming the Maharaja of Punjab. His capital was Gujranwala which was later shifted to Lahore.

Ranjit Singh fought with the Afghans, captured the Pashtun territory, including Peshawar, captured the province of Multan, thereby putting an end to thousand years of Muslim rule.
He defeated a large army of  Yusafzai tribesmen north of Kabul River. He became the first Sikh emperor after uniting the 11 Sikh kingdoms of Punjab together to form an empire from 1799-1839.
Maharaja Ranjit Singh developed a formidable military machine. He was the first Asian ruler  to modernize his army to European standards. The majority of his subjects was Muslims and was intensely loyal to him.


Maharaja Ranjit Singh as an administrator

Maharaja Ranjit Singh was a secular king. He was an able administrator and a statesman. Although he was a Sikh he never tried to force Sikhism on his subjects and he respected all religions.
The most notable trait of his polity was the complete freedom of expression and worship enjoyed by all his subjects. He had been likened to Mehmet Ali and to napoleon.
He is known to have never punished a criminal to death. Ranjit Singh is known for uniting Punjab as a strong nation. He was the proud possessor of the Kohinoor diamond.

The Harmandir Sahib Gurdwara was built under the patronage by Maharaja Ranjit Singh. He made the golden beautification of the Harmandir Sahib with marble and gold.
It is the most revered temple of the Sikhs and is known as the Golden Temple. He built two temples in Punjab- Takht Sri Patna Sahib and Takht Sri Hazur Sahib.
2897