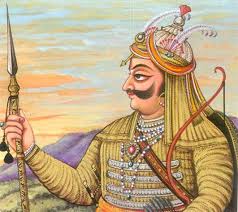 Rana Pratap was born in 1540 at Kumbhalgarh in Rajasthan. He was born to Maharana Udai Singh II and Rani Jeevant Kanwar. His father ruled the kingdom of Mewar.
Rana Pratap had several queens and children. Rana Pratap died on January 19, 1597 following injuries while hunting. He died at the age of 56 years. The Maharana died fighting for his nation and for his people.


Maharana Pratap as an emperor

Rana Pratap was one of the greatest Rajput soldiers of India. He was known for the display of bravery and chivalry. Rana Pratap was opposed to the Mughal rule in India. He could never identify the superiority of Mughal emperor Akbar. He never submitted to the Mughals.
He instead tackled the vast army of Akbar. During his rule Chittorgarh was under the capture of the Mughals. Pratap Singh had always aspired to reconquer Chittorgarh.
But his father decided that they would leave the place. Pratap Singh, however, never won back Chittor but always fought for it. He became Maha Rana Pratap Singh after the death of his father.

He want to negotiate or be a subject to Akbar. With the failure to negotiate a treaty with Pratap Singh, Akbar blocked Mewar from the rest of the world. To prepare a battle with the Mughals, Pratap Singh altered his administration. He moved his capital to Kumbhalgarh.


Maharana Pratap as an administrator

Maharana Pratap was called the light and life of the Hindu community. He was an able administrator. His administrative organization was well structured. Pratap’s associates included Jhala Maan, Bhilu Raja, Bhama Shah and Hakim Khan Soor.
Padmavat Charita and the poems of Dursa Ahada were written during his reign. His love of architecture could be noticed from the places at Ubheshwar, Kamal Nath and Chavand.

The Government of India issued commemorative stamps and coins in honor of this great son of India.
Pratap’s Chetak-mounted statue along with those of his renowned associates Jhala Maan, Bhilu Raja, Bhama Shah, Hakim Khan Soor and an attendant-foot-soldier was installed in front of Parliament House in New Delhi on August 21, 2007.
The bronze statue of Maharana Pratap Singh and his favorite and loyal horse Chetak stands at the Moti Magri overlooking Fateh Sagar.
8043