Mangal Pandey was an Indian soldier who played a key part in events immediately preceding the outbreak of the Indian rebellion of 1857. Mangal Pandey was considered as the chief initiator and the centre stage in the Barrackpore  uproar. Pandey is regarded as a freedom fighter of modern India who laid down his life for the sake of freedom. 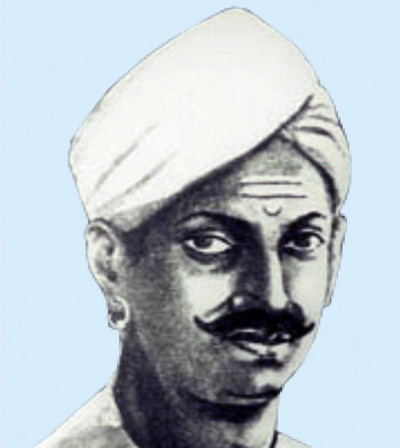 Mangal Pandey was a sepoy working under the British East India Company. He was born on 19 July 1927 in the village Nagwa, of Ballia district, Uttar Pradesh in a Bhumihar Brahmin family. He had spent his childhood in Suhurpur. His father was Divakar Pandey. Mangal Pandey also had a sister who later died in the 1830s famine. They belonged to the typical village middle-class family.  His father served as a peasant. He grew up to become a staunch Hindu with strict religious beliefs. During his early life, Mangal Pandey`s society was quite composite. He had Nakki Khan, a boy of his own age, the son of the village Maulavi as his friend. Muslims came over to his house regularly. They were welcomed with open arms and fed non-vegetarian food in separate dishes. Divakar Pandey took Mangal to various Muslim fairs held at dargahs.

In the year 1849 when he was 18  he joined the  East India Company’s forces.  Mangal Pandey was 22 years old when he joined in the 34th Bengal Regiment. However, his joining in the army was entirely unplanned. During his visit to Akbarpur, a regiment that was marching towards Varanasi  recruited him on the road. He willingly gave his consent. However, his move was not entertained by his friend Nakki Khan although his father, Divakar Pandey, had agreed to it impassively.

Sepoy Mutiny 1857- Mangal Pandey was considered as the chief initiator and the centre stage in the Barrackpore  uproar. The British had three musketry depots, in Dum Dum Ambala  and Sialkot and three arsenals in Fort William Calcutta, Dum Dum and Meerut. The Brown Bess muskets the sepoys owned were going to be replaced by the Enfield rifle in which a new kind of greased bullet was to be used. The rebellion is also known as India's First War of Independence, the Great Rebellion, the Indian Mutiny, the Revolt of 1857, the Uprising of 1857, the Sepoy Rebellion and the Sepoy Mutiny. The Mutiny was a result of various grievances. However the flashpoint was reached when the soldiers were asked to bite off the paper cartridges for their rifles which they believed were greased with animal fat, namely beef and pork. This was, and is, against the religious beliefs of Hindus and Muslims, respectively.This led to an unrest among the sepoys

Mangal Pandey, along with his trusted band of followers in the two remaining regiments had decided upon to revolt against  Lt. Wheeler of British East India Company. He was furious about the issue of the greased cartridge in Barrackpore, which at first was taken as a rumour by all. He was the sole man to opt for extreme measures to stand alone against the British. He was pivotal in urging  men from different parts of the country to unite and make the call a success.

Calcutta –Patna Conspiracy- The role of Mangal Pandey in Calcutta-Patna Conspiracy made him the leader  in his regiment and that was the main criteria to lead his men against the British Army. The Calcutta-Patna Conspiracy was planned in gigantic proportions beginning from Bengal and reaching the extremities of northern India. Mangal Pandey, in the beginning was not interested much to join such outcries, he was too engulfed in his private issues. However, his boyhood companion, Nakki Khan had induced him to the problem. Gradually, after meeting several Zamindars from Bengal, Mangal was convinced that the conspiracy could be turned into a huge one. Men from Patna and other parts of Bihar started to collaborate with the ousted Maharajas of the princely states like Baji Rao  or Nana Sahib. In his enterprises, Mangal Pandey had several allies to assist him.

Mangal Pandey`s rebelliousness and his uprisings were condemned and he was put on trial. The court declared him guilty and Mangal Pandey was hanged till death on 8th April 1857, leaving behind him the tremendous chain of freedom fighters.

In the year 2005 the film Mangal Pandey – The Rising was released. The film was directed by Kiran Mehta starring Indian actor, Aamir Khan along with Rani Mukerji,  Toby Stephens  and Amisha Patel.  The film based on the sequence of events that led up to the mutiny.