One of the greatest rulers of ancient India and the founder of the Gupta Empire, the name of Samudragupta shines with glory. Samudragupta was popularly known as the Napoleon of India because he fought and won many glorious wars. 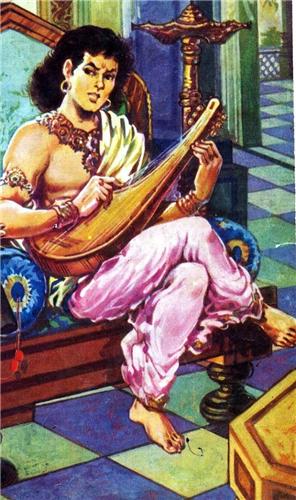 Samudragupta as a ruler

Samudragupta was a victorious and efficient ruler. He belonged to the Gupta Dynasty, the ‘Golden Age’ of classical India. The Gupta dynasty started from a small kingdom in Magadha in the late 3RD century.
It flourished rapidly under the efficient rule of Chandragupta I and later by his son Samudragupta. In the words of many historians, the Gupta dynasty was a Vaishya dynasty.

Samudragupta was a very powerful ruler among the Gupta kings. At the beginning he waged wars and started conquering neighbouring kingdoms of Shichchhatra and Padmavati. He also defeated the Kota kings. He subjugated kingdoms like the Malavas, Abhiras, Aijunayanas, Kakas, Mudrakas and Prarjunas.
It can be thus said that he conquered both the northern as well as the southern states. His rule extended from the Himalayas to the river Narmada and from the Brahmaputra to the river Yamuna.
He adopted the title of Maharajadhiraja (king of kings) and Chakravartin (Universal Monarch). He adopted the policy of ‘ Digvijaya’ which stands for the conquest and annexation of all territories.

Samudragupta as an administrator

Samudragupta was the first Gupta king to issue coins. He issued seven different types of gold coins such as Standard type, Lyrist type, Asvamedha type, Archer type, Battle Axe type, Kacha type and Tiger type.
The inscription engraved on one of the rocks found at Kousambi describes about his reign which has been recorded by Harishena, one of the important scholar during his rule.

He himself was a poet and musician. His periods saw eminent scholars like Harishena, Vasubandhu and Asanga, playwrights like Kalidasa who wrote Shakuntala, mathematician and astronomers like Aryabhatta, Varahamihira and Vatsyayana.
The period also saw educational institutes like Nalanda and Taxila universities. Samudragupta was a strict follower of Hinduism. He was a devoted follower of Vishnu. He also had faith in other religions as well such as Budhism.
The king permitted the Buddhist king of Sri Lanka to build a monastery at Bodh Gaya. Another important reign was his matrimonial alliance with the Vakataka king Rudra Sena II. Samudragupta was popularly known as the Napoleon of India because he fought and won many glorious wars.
6078