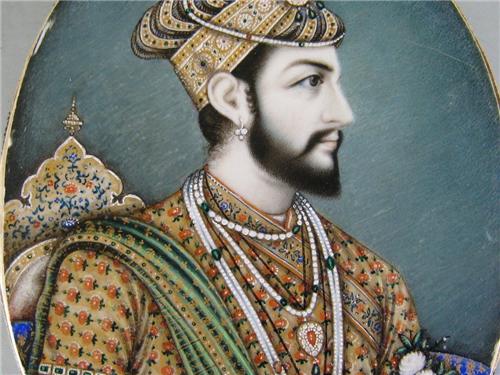 Shah Jahan was the fifth Mughal emperor to rule India and is the grandson of the legendary ruler, Akbar the Great.
The name ‘Shah Jahan’ comes from Persian meaning ‘Ruler of Everywhere’. He was the Emperor of Mughal Empire in South Asia from 1628 to 1658.
He was the direct descendant of Genghis Khan through Timur and was the heir of the Mughal Empire of Babur.
When he was young, he was chosen as the successor to the Mughal throne after the death of Emperor Jahangir.
He is considered to be one of the greatest Mughals and his reign has been called the Golden Age of Mughal Empire.

Shah Jahan was born as prince Shihab-ud-din Muhammad Khurram on 5th January 1592 in Lahore Pakistan. He was the third and favorite son of Emperor Jahangir from his Rajput wife Gossaini. The name ‘Khurram’ which has its origin in Persian means ‘joyful’ and was given to him by his grandfather Akbar.
While leading his father’s armies in numerous armies in different campaigns against the Mewars, the Deccan Sultanates and the Kangra Fort. He was responsible for most of the territorial gains during his father’s reign.
Shah Jahan also has a talent and taste for building, having impressed his father at the age of 16 when he built the quarters within his great grandfather Emperor Babur’s Kabul fort and redesigned buildings within the Agra fort. He also carried the universally famous titles like ‘the builder of marvels’.

In 1607 A.D. Shah Jahan was betrothed to Arjumand Banu Begum who was just 14 years at that time. She was the niece of Nur Mahal, the famous queen of Jahangir. Shah Jahan found his bride to be elect in appearance and character at all times and so gave her the tile’ Mumtaz Mahal’.
Mumtaz Mahal became the unquestioned love of Shah Jahan’s life. She is utterly devoted and was a constant companion and a trusted confidante of Shah Jahan. She is portrayed by Shah Jahan’s chronicles as the perfect wife with no aspirations to political power. Mumtaz Mahal had fourteen children with Shah Jahan.
Despite her frequent pregnancies, she travelled with Shah Jahan’s entourage throughout his earlier military campaigns and the subsequent rebellion against his father.
Mumtaz Mahal died in Burhanpur in 1631 A.D. while giving birth to their fourteenth child, a baby girl. During that time, she as accompanying her husband while he was fighting a campaign in the Deccan Plateau.
Shah Jahan was also married to two other wives, Akbarabadi Mahal and Kandahari Mahal, though his relationship with them ‘had nothing more than the status of marriage’. His affection and attraction for Mumtaz Mahal exceeded more than what he had for the other two wives.


Shah Jahan as an Emperor:

In the Mughal Empire, the inheritance of power and wealth is not determined by birth succession, but by the princely sons competing to achieve military successes and consolidating power in court. This, however, led to rebellions and wars for succession to the throne.
During Shah Jahan’s formative years, an intense political climate occurred in the Mughal court. In the year 1611 when his father Jahangir married Nur Jahan, she became an important member of Jahangir’s court and with her brother Asaf Khan gained considerable influence in the Empire.
Shah Jahan’s marriage to Asaf Khan’s daughter Mumtaz Mahal consolidated Nur Jahan and Asaf Khan’s positions in court. In the year 1614, Shah Jahan commanded a vast army of Mughals with many Sowars and subdued the Rajput Maharana of Mewar who surrendered and submitted to Shah Jahan.
Shah Jahan's successive military success against the Lodi and Deccan secured the southern border and his father rewarded him with the title ‘Shah Jahan Bahadur’.
However, later, Nur Jahan’s decision to have her daughter from her first marriage wed Shah Jahan’s younger brother Shahzada Shahryar and her support for his claim to the throne led Shah Jahan into open revolt against his father in the year 1622.
The rebellion was suppressed by Jahangir’s forces in the year 1626 and Shah Jahan was forced to submit unconditionally.
In the year 1628, after becoming the Emperor, Shah Jahan’s forces were ambushed by Sikh rebels. The Emperor then organized an assault which caused all the Sikhs to flee. Shah Jahan repulsed the Portuguese in Bengal, captured the Rajput kingdoms of Baglana, Mewar and Bundelkhand to the west and in the northwest captured beyond the Khyber Pas.
Thereafter, Shah Jahan captured the city of Kandahar in the year 1638 from the Safavids prompting the retaliation of the Persians led by Abbas II of Persia who recaptured it in 1649. Thereafter, although the Mughal army tried to recapture during the Mughal-Safavid War, it failed to recapture.

During his reign, the Marwari horse was introduced which was Shah Jahan’s favorite, and various Mughal Cannons were also produced in Jahangir Fort.

The Mughal Emperor Shah Jahan also gave orders to Qasim Khan, the Mughal viceroy of Bengal to drive out the Portuguese from their trading post in Port Hooghly. On 25th September 1632, the Mughal Army raised imperial banners and gained control over the Bandel region and the renegade garrison was punished.
During the time he was encamped in Baghdad, Sultan Murad IV is known to have met Shah Jahan’s ambassadors who presented 1000 pieces of finely embroidered cloth and even armor. He also met the architects who later lead to the design of the Taj Mahal.
During the time when Shah Jahan became ill in 1658, Dara Shikoh assumed the role of regent in his father’s stead which brought the animosity of his brothers. After hearing about the inheritance of the regency, his younger brothers declared their independence and marched upon Agra in order to claim their riches.
Aurangzeb, who was the third son and the ablest and virile among the brothers gathered a well-trained army and became its chief commander. He faced his elder brother and heir apparent Dara’s army close to Agra and completely defeated him during the Battle of Samugarh.
Although Shah Jahan during that time fully recovered from his illness, Aurangzeb declared him incompetent to rule and put him under house arrest in Agra Fort. Jahanara Begum Sahib, Shah Jahan’s first daughter, voluntarily shared his eight-year confinement and nursed him in his dotage.
On January 1666, Shah Jahan fell ill with dysentery and was confined to bed. As a result, he became weaker with time. He then commanded the ladies of the imperial court to take care of Jahanara and after reciting the Islamic declaration of faith and verses of the Quran, Mughal Emperor Shah Jahan died.
Princess Jahanara planned a state funeral and his body was carried in a procession by the eminent nobles and citizens of Agra. Aurangzeb refused to attend the procession. His body was interred next to the body of his beloved wife Mumtaz Mahal.

Shah Jahan’s reign saw some the extraordinary architectural and artistic accomplishments. The land revenue during his time was higher than any other Mughal ruler. During his rule, many Mughal artistic buildings were constructed. Shah Jahan was a prolific builder having a refined artistic and aesthetic sense.
Among the buildings constructed during his time include the Red Fort, Jama Masjid, and Shalimar Gardens of Lahore, sections of Lahore Fort like Moti Masjid, Sheesh Mahal and Naulakha Pavilion and his tomb of Jahangir.
Other important buildings of Shah Jahan’s rule were the Diwan-i-Am and Diwan-i-Khas in the Red Fort complex in Delhi. Shah Jahan is also credited to have commissioned about 777 gardens in Kashmir which were his favorite summer residence.

Shah Jahan was one of the greatest patrons of Islamic architecture. His most famous building was the Taj Mahal, which is presently a wonder of the world. Shah Jahan built the Taj Mahal out for his love for his wife Mumtaz Mahal.
The structure and the architecture of the Taj Mahal draw people from all over the world to be mesmerized by its beauty. The building took twenty years to complete and was constructed from white marble underlaid with brick. Upon Shah Jahan’s death, his son Aurangzeb had him interred in the Taj Mahal next to Mumtaz Mahal.
Shah Jahan’s cenotaph is bigger than that of Mumtaz Mahal but reflects the same elements including a larger casket on a taller base decorated with astonishing precision with lapidary and calligraphy that identifies him. The pen box and the writing tablet were traditional Persian funerary icons describing the caskets of men and women respectively.
Shah Jahan was also the founder of the new imperial capital called Shahjahanabad, which is presently known as Old Delhi. Shah Jahan also had the Peacock Throne which was made to celebrate his rule. Shah Jahan also placed profound verses of the Quran on his masterpieces of architecture.
Apart from that, all the inscriptions on the Taj Mahal tombs of Shah Jahan and his wife are in Persian Calligraphy. On the Agra Fort, there are Quranic Calligraphy and Persian poems in Nasta inscription.
13435