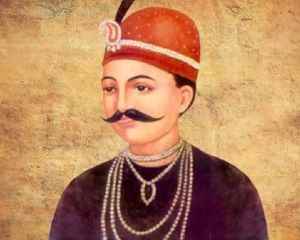 Tatya Tope was a rebel credited with initiating the First war of Independence. Tope was a supporter of Nana Sahib, rebel Indian leader during the Indian Rebellion of 1857.
When the political storm was gaining momentum, he won over the Indian troops of the East India Company, stationed at Kanpur, established Nana Sahib’s authority and became the commander in chief of his revolutionary forces.
Progressing with the Gwalior contingent after the British reoccupation of Kanpur he forced General Windham to retreat from Kanpur. After losing Gwalior he launched campaign in Sagar, Madhya Pradesh and Narmada River regions and Rajasthan.
After the reoccupation of Kanpur he shifted his headquarter to Kalpi and joined he joined hands with Rani Lakshmibai. He then led a revolt in Bundelkhand. Later he declared Nana Sahib a peshwa.
Tope was betrayed by his trusted friend Man Singh and was defeated by general Napier’s British Indian troops. He was defeated and captured in 1859 and was tried by a military court. On April 18, 1859 the British government executed him at Shivpuri.

The Nana Rao Park in Kanpur was made in honour of Nana Sahib and Tatya Tope. There is a statue of Tatya Tope at the park. His statue also stands at his hometown at Yeola.
14046