Satish Gujral is an eminent Indian painter, sculptor and muralist. A Padma Vibhushan awardee, Gujral has consistently dominated the art scene in India for the entire post-independent era.

Satish Gujral born on 25 December 1925 in Jhelum, Punjab. He is the younger brother of former Indian prime minister Inder Kumar Gujral. During his growing years Gujral saw the partition of India and the agony of the immigrants which had an impression on his mind and which was subsequently manifested in the works of the artist.
In 1939 Gujral joined the Mayo School of Art in Lahore to study Applied Arts. In 1944 he joined the JJ School of Art in Bombay where he came into contact with the Progressive Artists Group.
He left for Mexico in 1952 on a scholarship for an apprenticeship with Diego Rivera and David Sequeiros. During this period he had scores of solo shows. Satish Gujral is married to Kiran with whom he has a son. 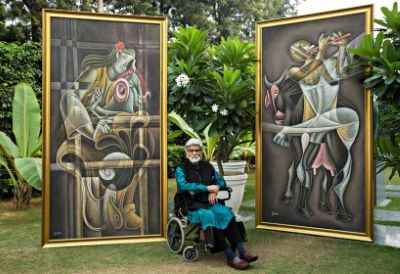 Satish Gujral is one of the pioneers of contemporary Indian art. He is an internationally acclaimed painter, muralist, sculptor, architect and Writer. He is known for his large murals, commissioned around India and abroad.
Gujral as an artist worked in plastic art, paintings, graphics, object design, sculpture murals and architecture. He had shows all around the world from 1952 to 1974 and has won numerous national and international awards.

Gujral has won equal acclaim as an architect also. His building of the Belgium Embassy in New Delhi has been selected by the international Forum of architects as one of the one thousand best built in the 20th century round the world.
The Belgian Government honoured him with the "ORDER OF THE CROWN" for designing the Belgian Embassy, the only non-Belgian Architect ever to win this distinction. His six books have been published, including his autobiography 'A Brush With Life'.


Awards and honours to Satish Gujral 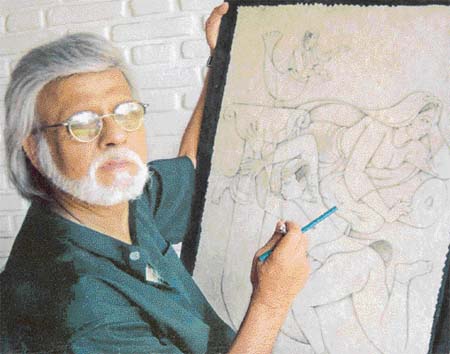 Satish Gujral has been given several awards for his contribution to Indian art. In 1989 the Delhi Citizen Council honoured him as one of the twenty five most prominent of its Citizens with the most significant contributions to the prestige of the city made in the last quarter century.
In 1999 the government of India awarded him the Padma Vibhushan. In 2014 he was honored with NDTV Indian of the Year Award. Dozens of documentaries have been made recording his work. The Belgian Government honoured  him with the "ORDER OF THE CROWN" for designing the Belgian Embassy.
Gujral won three National Awards-- Twice for Painting and once for Sculpture. He was honoured by Mexico`s International Award for "Life Time Achievements".
3159