Tyeb Mehta was a distinguished painter of India. Mehta was part of the noted Bombay Progressive Artists' Group which included great artisits like MF Husain, FN Souza and SH Raza. 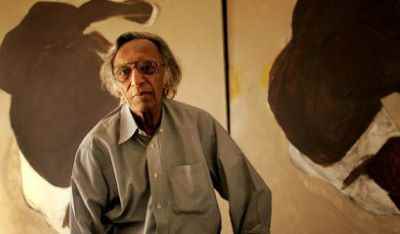 His painting 'Triptych Celebration' was the highest earner for an Indian painting at an international auction, the then record. The government of India awarded him with the Padma Bhushan for his contribution to painting.
He was born in town of Kheda district, the Indian state of Gujarat. He was brought up in the Crawford Market neighbourhood of Mumbai, populated by Dawoodi Bohras.
At 22 years, during the partition riots of 1947 in Mumbai, while staying at Lehri House, Mohammed Ali Road, he witnessed a man being stoned to death by a mob, this he not only expressed in a drawing but it was to have lasting impact on his work, leading to stark and often disturbing depiction of his subjects.
For a while initially, he worked as a film editor in a cinema laboratory at Famous Studios, in Tardeo, Mumbai. Later, he received his diploma from Sir J. J. School of Art in 1952, and was part of the Bombay Progressive Artists' Group, which drew stylistic inspiration from Western Modernism, and included greats of Indian paintings such as F.N. Souza, S.H. Raza and M.F. Husain. 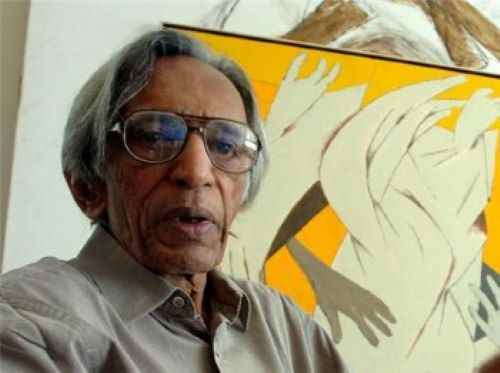 Tyeb Mehta held the then record for the highest price an Indian painting has ever sold for at auction ($317,500 USD or 15 million Indian rupees) for Celebration at Christie's in 2002. In May 2005, his painting Kali sold for 10 million Indian rupees (approximately equal to 230,000 US dollars) at Indian auction house Saffronart's online auction.
A reinterpretation of the tale of demon Mahishasura by Mehta showing goddess Durga locked in an embrace with the demon sold for $1.584 million.
In 2008 one of his paintings sold for $2 million. In December 2005, Mehta's painting Gesture was sold for 31 million Indian rupees to Ranjit Malkani, chairman of Kuomi Travel, at the Osian's auction. That made it the highest price ever paid by an Indian for a work of Indian contemporary art at auction in India at the time.

He received a fellowship from the John D. Rockefeller 3rd Fund in 1968, also in the same year, a gold medal for paintings at the first Triennial in New Delhi, and in 1974 the Prix Nationale at the International Festival of Painting in Cagnes-sur-Mer, France, the Kalidas Samman, instituted by the Madhya Pradesh Government, in 1988, the Dayawati Modi Foundation Award for Art, Culture, and Education in 2005, and the Padma Bhushan in 2007. His film 'Koodal' was awarded the Filmfare Critics' Award in 1970.
Mehta's work has been exhibited in the Museum of Modern Art, Oxford, England, and the Hirshhorn Museum. A career retrospective is scheduled for later 2009 at the National Gallery of Modern Art, in New Delhi.