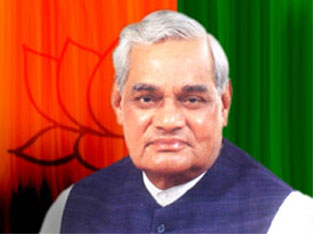 Atal Bihari Vajpayee was the former prime minister of India. He served as the prime minister of India three times.
He has been the only prime minister since Jawaharlal Nehru to occupy the office of the prime minister of India through three successive mandates.
He has also been the first prime minister since Indira Gandhi to lead his party to victory in successive elections.
He was referred to as the Bhisma Pitamah of Indian politics by Prime Minister Manmohan Singh during a speech in the Lok Sabha in 2008. Vajpayee took strong initiatives to maintain peaceful relations with Pakistan.
He introduced many economic and infrastructural reforms during his tenure. The government of India honored Atal Bihari Vajpayee with the Padma Vibhushan in 1992.Conferred India's highest civilian honour, the Bharat Ratna, his birthday is marked as Good Governance Day.

Atal Bihari Vajpayee was born on December 25, 1924 in Gwalior, Madhya Pradesh. He was born to Krishna Bihari Vajpayee Krishna Devi. He studied at Victoria College in Gwalior.
He completed his graduation with distinction in Hindi, English and Sanskrit. He did his post graduation from DAV College, Kanpur. Vajpayee never married and dedicated his life for the service of the nation. 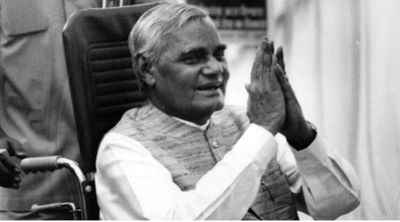 Atal Bihari Vajpayee served as the prime minister of India from 1996 to 2004 in three consecutive terms. He has been Member of Parliament since 1957. He was elected to the 5th, 6th and 7th Lok Sabha and again to the 10th, 11th, 12th and 13th Lok Sabha and to Rajya Sabha in 1962 and 1986.
He has again been elected to the Parliament from Lucknow in Uttar Pradesh for the fifth time consecutively.  He is the only Parliamentarian elected from different states at different times namely- UP, MP, Gujarat and Delhi.

Vajpayee took part in the freedom struggle of the nation and was arrested for participating in the quit India Movement. In 1951 he was assigned to work for the Bharatiya Jana Sangh (BJS), political party associated with the RSS.
He shared good rapport with Shayama Prasad Mukherjee, leader of BJS. He was elected to the Lok Sabha in 1957. He was a good orator which impressed former Prime Minister Jawaharlal Nehru who predicted that one day he would be the prime minister of India.
He became the face of the Jana Sangh by dint of his quality as an orator and his organizational skills. In 1968 he became the national president of the Jana Sangh. Vajpayee was arrested during the emergence clampdown. He later led the Jana Sangh to merge with the Janata party.
He became the Minister of external affairs in the Janata government after the victory of the Janata party in 1977 general elections. In the same year he became the first person to deliver speech in Hindi to the United Nations General Assembly. 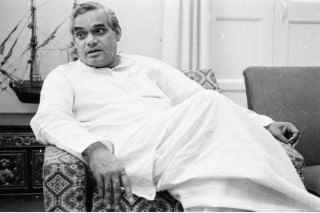 The Janata party dissolved after Morarji Desai resigned as PM. Vajpayee joined the BJS and Rashtriya Swayamsevak Sangh colleges to form the Bharatiya Janata Party (BJP) in 1980. He became the first president of the BJP. The BJP was a strong critique of the Congress party.
The party opposed Sikh militancy, the operation blue star and the anti Sikh riots. The party began expanding its horizon to attract young Indians. During this time Vajpayee remained at the forefront as the party president and the leader of the Opposition in the Parliament.
In the 1996 general elections the BJP emerged as the single largest party in the Lok Sabha. Vajpayee was sworn in as the prime minister of India. However, he resigned after 13 days as he could not gain a majority. In the 1998 general elections the BJP emerged victorious.
The National Democratic Alliance was formed by the joining of some political parties with the BJP this time. Vajpayee was again sworn in as the prime minister. His government lasted for 13 months. During this time India conducted five underground nuclear tests in Rajasthan.

Vajpayee’s popularity rose this time. Vajpayee began a push for peace process wit Pakistan in the late 1998. He initiated a new peace process with the inauguration of the Delhi-Lahore bus service in 1999 so as to permanently resolve the Kashmir dispute and the differences wit Pakistan.
The Lahore declaration promoted a commitment to dialogue, expanded trade relations and mutual friendship and envisaged a goal of denuclearized South Asia. Vajpayee took strong initiatives to maintain peaceful relations with Pakistan. In the meanwhile the Kargil war was fought.
The Indian army won the war. This victory in Kargil strengthened Vajpayee’s image. The countrymen hailed him for his strong leadership. As the AIADMK withdrew support from the government fresh elections were conducted. In the 1999 general elections the BJP emerged victorious.
Vajpayee was sworn in for a third term as the prime minister of India. The coalition government formed thus lasted for a term of full 5 years, thus being the only non Congress government to do so.
Vajpayee is particularly remembered for tackling the Indian airlines hijack incident. The NDA suffered a loss in the 2004 general elections. Vajpayee resigned the PM. He, however, remained as chairman of the NDA. He announced his retirement from active politics in December 2005.

Vajpayee made many developments during his tenureship as the prime minister. He introduced many economic and infrastructural reforms including encouraging private sector and foreign investments, reducing government wastes, encouraging research and development privatization of government owned corporations.
His pet projects were the National Highway Development Project and Pradhan Mantra Gram Sadak Yojna. Vajpayee promoted pro business, free market reforms to bolster  economic transformation in India, increased competitiveness, extra funding and support for information technology sector  and high tech industries, improvement in infrastructure, deregulation of trade, investment and corporate laws which increased foreign capital investment and set in motion an economic expansion.
In 2001 the Vajpayee government launched the Sarva Shiksha Abhiyan, aimed at improving the educational quality at the primary and secondary level.
The Historic Vision Document on the future course of relations between the US and India was signed by Vajpayee and President Bill Clinton during the latter’s visit to India. In 2002-03 the government pushed economic reforms and the country’s GDP growth accelerated at record levels exceeding 6-7 %.
Lahore summit: In late 1998 and early 1999, Vajpayee began a push for a full-scale diplomatic peace process with Pakistan. With the historic inauguration of the Delhi-Lahore bus service in February 1999.
Nuclear tests: In May 1998, India conducted five underground nuclear tests in the Pokhran desert in Rajasthan after operation Operation Smiling Buddha.
Kargil War: Vajpayee's diplomacy won the Kargil War for India. The Kargil War between India and Pakistan on 26 July, 1999.

A Poet and Writer

The government of India honored Atal Bihari Vajpayee with the Padma Vibhushan in 1992. He was awarded the Lokmanya Tilak award in 1994, the best parliamentarian award in 1994 and the Bharat Ratna Pandit Govind Vallabh Pant award in 1994.

He breathed his last at All India Institute of Medical Sciences (AIIMS) in New Delhi. The 93-year-old leader had been suffering from urinary tract infection, lower respiratory tract infection and kidney problems. His death was mourned by leaders across political lines.