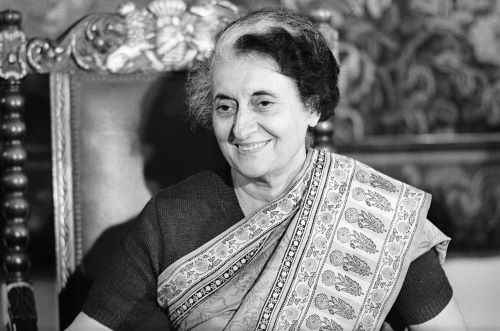 Indira Priyadarshini Gandhi was the first and till date the only female Prime Minister of the India. India flourished under the leader ship of this iron woman of the country.
Indira Gandhi ran the government of the country for three consecutive terms from 1966 to 1977 and for a fourth term from 1980 until her assassination in 1984.
Indira Gandhi introduced economic policies and promoted agricultural productivity, which helped in drifting the economy of the country.

As prime minister, Gandhi was known for her political intransigency and unprecedented centralisation of power. Some of her great decisions here:
She went to war with Pakistan in support of the independence movement and war of independence in East Pakistan, which resulted in an Indian victory and the creation of Bangladesh.
She instituted a state of emergency from 1975 to 1977 where basic civil liberties were suspended and the press was censored. Widespread atrocities were carried out during the emergency.
She initiated other major program for the development of country such as  National Nuclear Program in 1967, Intense Agricultural District Program (IADP) or Green revolution from 1960, White Revolution etc.

Following the 1977 elections, a coalition led by the Sikh-majority Akali Dal came to power in the northern Indian state of Punjab. In an effort to split the Akali Dal and gain popular support among the Sikhs, Gandhi's Congress Party helped to bring the orthodox religious leader Jarnail Singh Bhindranwale to prominence in Punjab politics.
Bhindranwale was the leader of Damdami Taksal had influence on Sikh youth. He persuaded many people to follow Sikh religions.
Operation Bluestar was aimed at neutralising militant Sikh preacher Jarnail Singh Bhindrawale and his band of armed supporters ensconced in the Golden Temple complex in Amritsar.
The assassination triggered anti-Sikh riots in which some 3,000 people were killed, many of them on the streets of New Delhi.

On 31 October 1984,  in revenge for Operation Blue Star, two of Gandhi's Sikh bodyguards named Satwant Singh and Beant Singh, shot her with their service weapons in the garden of the prime minister's residence.
To pay tribute to out former Prime minister of India, Click Here.
4556