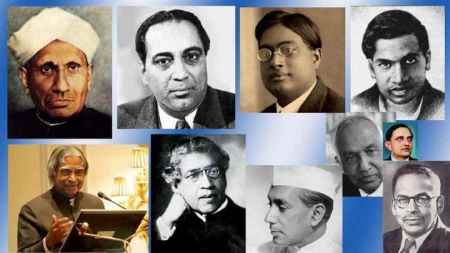 Dr. APJ Abdul Kalam: Author of "Wings of Fire", Dr. Kalam was a notable scientist and engineer of India. He served as the 11th President of India from the period 2002 to 200. Read More
Dr. Anil Kakodkar: He is a very distinguished nuclear scientist of India. He served as the chairman of the Atomic Energy Commission of India (AECI) as well as the Secretary to the Government of India, Department of Atomic Energy. Read More

Arun Majumdar: Arun Majumdar is a materials scientist, engineer. He is a leading scientist is the fields of thermoelectric materials, heat and mass transfer, thermal management and waste heat recovery. Read More

Arun N. Netravali: He is an Indian-American computer engineer who has contribution in digital technology including HDTV. He conducted seminal research in digital compression, signal processing and other fields. Read More

Aryabhatta: He was the first in the line of great mathematician -astronomers from the classical age of Indian mathematics and Indian astronomy. He also worked on the approximation for “pi”.

Arvind Bhatnagar: Arvind Bhatnagar made significant contributions to Solar Astronomy, and founded several planetaria across India.  Read More
Birbal Sahni:  Born on 14 November 1891 in Punjab, Birbal Sahni studied the fossils of the Indian subcontinent and his greatest contributions lie in the study of botany of the plants of India as well as paleobotany. Read More
CP Ramanujam: He was an Indian mathematician. He is famous for his works in the fields of number theory and algebraic geometry. Read More

Chandrasekhara Venkata Raman: C.V. Raman is one of the most renowned scientists produced by India. For his pioneering work on scattering of light, C.V. Raman won the Nobel Prize for Physics in 1930. Read More

Jayant Vishnu Narlikar: He is an Indian astrophysicist. He is a proponent of steady state cosmology.  He developed with Sir Fred Hoyle the conformal gravity theory, commonly known as Hoyle&Narlikar theory. Read More

Kalpana Chawla: She was an Indian American astronaut who was a mission specialist in the space shuttle Columbia. She was the first Indian woman and the second person from India to fly in space.  Read More

PC Mahalanobis: Prasanta Chandra Mahalanobis was an Indian scientist and applied statistician. He is best remembered for the Mahalanobis distance, a statistical measure. Read More

Rakesh Sharma: He was the first Indian to travel into space. Rakesh Sharma is a former Indian Air force test pilot and Cosmonaut who flew in space abroad the Soyuz T-11 as part of an Intercosmos Research team. Read More

Satyendra Nath Bose: He was an Indian physicist specializing in mathematical physics. He is best known for his work on quantum mechanics in the early 1920s, providing the foundation for Bose-Einstein statistics and the theory of the Bose-Einstein condensate. Read More

Srinivasa Ramanujan: Srinivasa Ramanujan was a great mathematician of India. He made significant contribution to the analytical theory of numbers and worked on elliptic functions, continued fractions, and infinite series. Read More

Vikram Sarabhai: The father of India's space program, Vikram Sarabhai was an Indian physicist who put India on the international map in the field of space research. Read More
29106