Avul Pakir Jainulabdeen Abdul Kalam, usually referred to as A. P. J. Abdul Kalam, is an Indian politician and scientist who served as the 11th President of India. A Bharat Ratna recipient, Kalam is famous for his contribution to the missile technology for India. 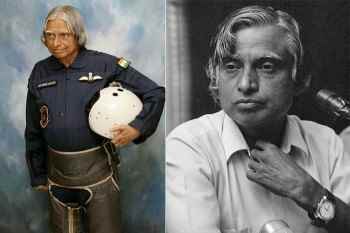 He was born on 15th October 1931 in Rameswaram in Tamil Nadu. He was born to father Jainulabdeen, a boat owner and his mother Ashiamma, a housewife. After completing his school, he would distribute newspapers in order to financially contribute to his father’s income.
He delicate four decades as a scientist and science administrator, mainly at the Defence Research and Development Organisation (DRDO) and Indian Space Research Organisation (ISRO) and was intimately involved in India's civilian space programme and military missile development efforts.
Kalam was also part of the INCOSPAR committee working under Vikram Sarabhai, the renowned space scientist.
Kalam played a major part in developing many missiles under the mission including Agni, an intermediate range ballistic missile and Prithvi, the tactical surface-to-surface missile, although the projects have been criticised for mismanagement and cost and time overruns.
He is known as the Missile Man of India for his work on the development of ballistic missile and launch vehicle technology. He also played a pivotal organisational, technical, and political role in India's Pokhran-II nuclear tests in 1998, the first since the original nuclear test by India in 1974.
After completing his school education at the Rameswaram Elementary School, he went on to attend Saint Joseph’s School in Tiruchirappalli where from he graduated in physics in the year 1954. After that he moved to Madras in the year 1955 to study aerospace engineering.
Kalam served as the 11th president of India, succeeding K. R. Narayanan. He won the 2002 presidential election with an electoral vote of 922,884, surpassing the 107,366 votes won by Lakshmi Sahgal. His term lasted from 25 July 2002, to 25 July 2007. Widely referred to as the "People's. President".
In 1998, along with cardiologist Soma Raju, Kalam developed a low cost coronary stent, named the "Kalam-Raju Stent". In 2012, the duo designed a rugged tablet computer for health care in rural areas, which was named the "Kalam-Raju Tablet".

Due to his poverty, he had to start working from an early age to supplement his family’s income. When he was a child, Kalam had a discipline of starting the day at 4 o’clock in the morning and following the footsteps of his brother to do homework before going to school to attend mathematics classes.
After completing his school, he would distribute newspapers in order to financially contribute to his father’s income. During his school years, Kalam scored average grades and was a bright and hardworking student. He had a strong desire to learn and spent hours on his studies, especially mathematics.
After completing his school education at the Rameswaram Elementary School, he went on to attend Saint Joseph’s School in Tiruchirappalli where from he graduated in physics in the year 1954.
After that he moved to Madras in the year 1955 to study aerospace engineering. In May 2011, Kalam launched his mission for the youth of the nation called the ‘What Can I Give Movement’ with a central theme to defeat corruption.
He also has interests in writing Tamil poetry and in playing the veenai. He was also nominated for the MTV Youth Icon of the Year award in the year 2003 and in 2006.
In the 2011 Hindi film ‘I Am Kalam’, A.P.J. Abdul Kalam is portrayed as an extremely positive influence to a poor but bright Rajasthani boy named Chhotu, who renames himself as Kalam in honor of his idol.

After his graduation from Madras Institute of Technology in the year 1960, Kalam joined the Aeronautical Development Establishment of Defense Research and Development Organization as the chief scientist. He started his career by designing a small helicopter for the Indian Army, but remained unconvinced with the choice of his job.
He was also a part of the INCOSPAR Committee working under Vikram Sarabhai. In the year 1969, Kalam was transferred to the Indian Space Research Organization where he was the project director of India’s first indigenous Satellite Launch Vehicle SLV-III which successfully deployed the Rohini satellite in near earth orbit on July 1980.
A. P. J. Abdul Kalam’s biggest achievement in life is considered to be joining the ISRO where he is said to have found himself while working on the SLV project.
Kalam first started work on an expandable rocket project independently at DRDO in the year 1965. In the year 1969, he received the government’s approval and expanded the program to include more engineers.
In the year 1963-64, Kalam visited NASA’s Langley Research Centre in Poquoson, Virginia and Goddard Space Flight Center in Greenbelt, Maryland as well as the Wallops Flight Facility situated in the Eastern Shore of Virginia. During the 1970s to 1990s, Kalam made an effort to develop the Polar SLV and SLV-III project which proved to be a success.
In the year 1974, Kalam was shifted to the Terminal Ballistics Research Laboratory (TBRL), which is a subsidiary of the DRDO.
Kalam was also invited by Raja Ramanna to witness the country’s first nuclear test, Smiling Buddha was a representative of the TBRL, even though he had not participated in developing the test or have taken part in the test site preparations or weapon designing.
In the 1970s, a landmark was passed when the ISRO first launched into space the locally built Rohini-1 using the SLV rocket. Kalam also directed the Project Devil and Project Valiant which sought to develop ballistic missiles from the technology of Kalam’s successful SLV programme.
Despite the Union cabinet’s disapproval, Indira Gandhi provided secret funds for these aerospace projects through her discretionary powers under Kalam’s directorship. Kalam also played a pivotal role in convincing the Union Cabinet to conceal the true nature of these classified aerospace projects.
Kalam’s research leadership and educational service brought him great recognitions during the 1980s which prompted the Indian Government to initiate an advanced missile program under his directorship.
Being the Chief Executive of the Integrated Guided Missile Development Program (I.G.M.P.D), he played a major role in developing many missiles in India including the Agni and the Prithvi. These projects, however, have been criticized for mismanagement and cost and time overruns.
Kalam was the chief scientific advisor to the Prime Minister and the Secretary of Defence Research and Development Organization from July 1992 to December 1999. The Pokhran-II nuclear tests were conducted during this period where he plated an extensive political and technological role.
Kalam served as the Chief Project Coordination, along with R, Chidambaram during the testing phase. In the year 1998, along with cardiologist Dr. Soma Raju, Kalam developed a low cost coronary stent.
It was named ‘Kalam-Raju Stent’ honoring their effort. In the year 2012, the duo designed a rugged tablet PC for healthcare in rural areas called as ‘Kalam-Raju Tablet’.

A. P. J. Abdul Kalam also served as the 11th President of India succeeding K.R Narayanan. He won the 2002 presidential election and served from 25th July 2002 to 24th July 2007. Kalam was the first scientist and bachelor to occupy the Rashtrapati Bhawan. During his tenure he was affectionately known as the ‘People’s President’.
On his own words, it was the signing of the Office of Profit Bill which was the toughest decision he took during his tenure. He is succeeded by Pratibha Singh Patil.
At present, Kalam is a visiting professor at the Indian Institute of Management, Ahmadabad and Indian Institute of Management, Indore along with several other academic and research institutions across India.
He is also the Chancellor of Indian Institute of Space Science and Technology in Thiruvananthapuram, a professor of Aerospace Engineering in Anna University (Chennai), JSS University (Mysore).
He is also involved in philanthropic work. Kalam is also a prolific writer and has written a number of inspiring books like ‘Wings of Fire’, an autobiography; ‘Scientist to President’, ‘Ignited Minds’, ‘India 2020’, ‘Children Ask Kalam’ and ‘Indomitable Spirit’ among others.

Future India 2020: In his Book Kalam strongly advocates an action plan to develop India into a knowledge superpower and a developed nation by the year 2020.
He maintains that his work on India’s nuclear weapons program would be a way to assert India’s place as a future superpower.
Kalam also had active interest in other development in the field of science and technology; he has proposed a research program for developing bio-implants.

On 27 July 2015, Kalam travelled to Shillong to deliver a lecture on "Creating a Livable Planet Earth" at the Indian Institute of Management Shillong. While climbing a flight of stairs, he experienced some discomfort, but was able to enter the auditorium after a brief rest.
He was rushed to the nearby Bethany Hospital in a critical condition; upon arrival, he lacked a pulse or any other signs of life.  Despite being placed in the intensive care unit, Kalam was confirmed dead of a sudden cardiac arrest at 7:45 p.m. IST.