Arvind Bhatnagar was an eminent scientist of India. He made significant contributions to Solar Astronomy. He was the founder-director of the Udaipur Solar Observatory and the founder director of Nehru Planetarium of Bombay. 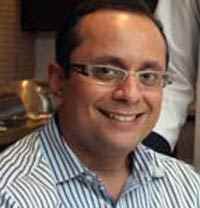 Arvind Bhatnagar was born on 19 November 1936 in Beawar, Rajasthan. After completing his MSc in Physics, he joined the UP State Observatory, Nainital in 1958 and worked there until 1961.
Bhatnagar obtained his Ph D degree in Solar Physics from Agra University in 1964 while working at the Kodaikanal Observatory under the guidance of Prof M K Vainu Bappu.
He was awarded the Carnegie Fellowship to work at Mount Wilson and Palomar Observatories, USA, during 1968-70. Later he worked as a Resident Astronomer at the Big Bear Solar Observatory of the California Institute of Technology, Pasadena, California, USA till 1972. He died on 18 May 2006 at Udaipur.

Prof Arvind Bhatnagar was known internationally for his significant contributions to Solar Astronomy. He took immense interest in popularization of astronomy and helped establishing several planetaria across India.
He was the founder-director of the Udaipur Solar Observatory. Bhatnagar had an idea to establish a unique island solar observatory in the middle of Lake Fatehsagar in Udaipur under the aegis of the Vedhshala, Ahmedabad.
He selected the lake site after taking into consideration the facts that Rajasthan received the maximum sunshine and the large body of lake water helps to stabilize the air turbulence arising due to heating of ground by the solar radiation.
The solar observatory was taken over by the Department of Space in December 1981 for its speedy growth and was affiliated to the Physical Research Laboratory, Ahmedabad.
The Udaipur Solar Observatory has become internationally renowned as one of the major centers for high-resolution solar observations. The observatory is also one of the six observatories located around the world participating in the Global Oscillations Network Group for the study of solar interior.
On 24 October 1995, during the Total Solar Eclipse, Dr Arvind Bhatnagar supervised the MiG-25 aircraft flying at 80,000 feet altitude as they traveled along the path of the eclipse at 3,000 km/h, gaining several precious minutes of observation denied to researchers stuck on the ground.