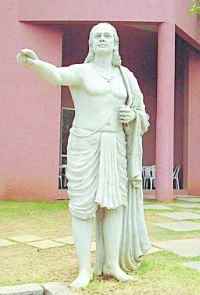 Not much information is available in history regarding the birth of Aryabhatta. However, it is believed that Aryabhatta was born in 476 between the Narmada and Godavari rivers in central India.

Aryabhata's system of astronomy was called the audAyaka system. Aryabhata also correctly insisted that the earth rotates about its axis daily and that the apparent movement of the stars is a relative motion caused by the rotation of the earth, contrary to the then-prevailing view that the sky rotated.
Aryabhata described a geocentric model of the solar system, in which the Sun and Moon are each carried by epicycles. They in turn revolve around the Earth. Aryabhatta also gave the scientific explanation of the solar and lunar eclipses.
He stated that the Moon and planets shine by reflected sunlight. He explained eclipses in terms of shadows cast by and falling on Earth. The works of Aryavhatta were of great influence in the Indian astronomical tradition. They also influenced several neighbouring cultures through translations.

aryabhattaIn honour to Aryabhatta India's first satellite Aryabhata and the lunar crater Aryabhata were named after him.  The Aryabhatta Knowledge University, Patna, has been established by Government of Bihar for the development and management of educational infrastructure related to technical, medical, management and allied professional education in honour of Aryabhatta.
The Aryabhatta Research Institute of Observational Sciences near Nainital, an Institute for conducting research in astronomy, atmospheric sciences and astrophysics has been named after this great scientist.
21943